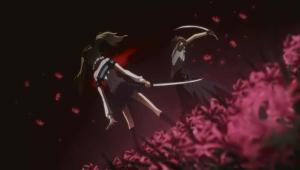 Hey, remember when I said last episode that I saw BL undertones in Yoite and Yukimi’s relationship?

Yeah, I totally lied – one of our newer characters is gonna happily oblige us on the BL quotient.

Err, anyway, we pick up right where we left off with Miharu and Thobari (who is actually called Kumohira much more, so I’m just gonna say that from here on). Miharu tells Kumohira to kill him right then if he doesn’t want him using the Shinrabanshou, but the conversation is interrupted by Hanabusa, Kumohira’s girlfriend, who has found Yoite on the street. Kumohira and Yoite almost get into a fight, but are halted by both Miharu and Hanabusa who yell at them for disturbing the neighbors.

Back in the field of flowers, Raikou and Raimei are facing off. Raikou asks Raimei if she wants to know why he killed their clan and joined the Kairoshuu, but Raimei says that she doesn’t care, she just wants to kill him. They begin to fight in earnest.

Back in Kairoushuu land, Gau wonders about when Raikou will return. Hattori comes in, and they begin to talk. We learn that Gau comes from a non-ninja family, and that it was Raikou who brought him into the world of Nabari. He asks about Raikou’s past, and Hattori reveals that Raikou massacred his own clan, which comes as a bit of a shock to Gau.

In Raikou and Raimei’s fight, Raikou uses a ninja tactic, much to Raimei’s anger. She screams at him, although he is hidden, and slashes away at the flowers in her anger, yelling at him for tainting their clan by using cheap ninja techniques, and screaming at him for killing the family that she loved so dearly. Raikou becomes enraged and comes at her from behind, slashing her across the chest. She falls. Kouichi and the two Fuuma ninja come to her rescue as Raikou walks away with a huge bouquet of the flowers from the field.

Back at Kumohira’s house, he fumes as Yoite and Miharu sits outside talking. Hanabusa explains that she brought him there because he kept stating that he had to see Miharu, and she remembered Kumohira telling her about Miharu before. It is clear that she knows much about the world of Nabari although she is not a ninja herself (she’s an archaeologist apparently).

Outside, Yoite and Miharu discuss their plans, and Yoite tells Miharu that he needs him to get some of the kinjutsu scrolls. Mihari says that he has his own secret plan, and Yoite comments that he seems more alive than before. Miharu tries to shake on the entire thing, but Yoite falters, and Hanabusa comes over to force their hands together. She then tells the two boys that they come talk to her any time, and she hugs them, but Yoite leaps away as if burned. Kumohira exchanges words with him over different visions of the Shinrabanshou, and Yoite admits that his aims are different from the Kairoushuu’s. Kumohira asks him why he took on the kira technique when he knew the consequences, but he storms out, Miharu following. Yoite threatens Miharu, though, and walks away into the night.

The phone rings in Kumohira’s house, and he answers it. It is Kouichi calling from a hospital with news of Raimei, who has just gone through surgery. Raimei is shown crying in frustration in her hospital bed, hooked up to an oxygen machine.

At Amatatsu’s sushi shop, Yukimi sits eating, having not heard from Yoite in a little while. Both Raikou and Gau are also present. Amatatsu asks about Yoite, and Gau states that Yukimi shouldn’t worry because he and Raikou’ll take care of Yoite if he’s betrayed the Kairoushuu. Raikou keeps the argument from escalating, though, and Yukimi and Amatatsu get into a sibling quarrel about Yukimi’s article regarding the sushi shop. Raikou looks on with a smile, flashing back to an argument he had with Raimei when they were children. He then excuses himself and steps outside, while Gau expresses worry about him to the siblings. Amatatsu talks about the different kinds of people who keep secrets, and suggests that Gau ask Raikou about his secret.

The next day, Raikou and Gau go forth as the Wakachi to punish some low-level ninjas. But after easily handling the first, Raikou suddenly has visions of his dead clan members and Raimei and one of the two low-levelers gets the better of him, firing a shot that grazes his arm. Gau attacks from behind the distract the man, who then begins to beat on him, prompting Raikou to go into an angry rage in which he kills the man. but he keeps slashing at the dead man long after he’s fallen, and Gau looks shocked and somewhat alarmed.

At a train station, Miharu boards a train – he’s going to see Raimei. Kumohira tells him that he can meet him there, that he’ll walk and see him later, but Miharu tells him not to. As the train sets off, he thinks about Hanabusa and how kind she was to him, and how he dislikes that. Back in the unused train car from episode seven, Yoite has similar thoughts, revealing that he doesn’t want people to be kind to him because he has nothing to offer in return.

Unlike a lot of people, I wasn’t disappointed in the Raimei vs. Raikou fight, although I do wish Raimei had at least inflicted some damage on Raikou.

Oh, and the bit I said earlier about the BL…

Yeah, I’m pretty sure that says it all – the second shot is of his face after thinking about Raikou with sparkles and a rose. I’m not saying Raikou feels the same, but there is no way you’re gonna convince me that Gau does not have the hots for Raikou; there is no straight guy on this planet who thinks of his male friend with flowers and sparkles while blushing. That is not a mancrush, that is a crush.

This entry was posted in A Day Without Me, Nabari no Ou and tagged Nabari no Ou. Bookmark the permalink.

3 Responses to Nabari no Ou Episode 10