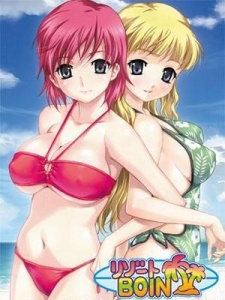 Resort Boin is an OVA which consists of two episodes, each of which are thirty minutes long. And it was pretty good.

Daisuke is your usual ambiguougsly aged teenager who is wicked horny. And he’s on vacation. Of course, he runs into two, big-breasted classmates of his. And they want in his pants. So the first episode consists of them doing so, along with the introduction of Daisuke’s cousin, who conveniently refers to him as ‘onii-chan’, and his cousin’s friend. There’s also a really weird tentacle rape sequence involving a Venus fly-trap-type plant from which Momo, the cousin’s friend, then wakes up from, it apparently having been a hallucination or nightmare. At the end, Daisuke ends up with one of the classmates, Nao, and they proclaim their love for one another.

The second episode isn’t clearly related to the first, but is once again in a summer vacation setting. Daisuke gets it on in the opening scene here, in a bathroom with a big-breasted blonde named Kanae. Kanae then gets reprimanded by her surfer friend, Mika, who, in any other show, would’ve been the lesbian of the crowd. But Mika does Daisuke in a shower stall in thanks for him saving her from the tentacle-monster Venus fly-trap (so, no tentacle rape, thank god). Oh, and before he saves her, he and Kanae bang in the woods again, and his cousin, Maya, gets upset after coming upon them. Maya treats Daisuke coldly for a few days, before he invites her to go see fireworks… and, surprise, surprise, they have sex. But her boobs are small (read: normal-sized) so she’s a bit embarrassed. They declare their love for on another.

Anywya, like I said, this worked because it didn’t take itself seriously at all. The Daisuke and Nao (one of the classmates) sex scene was a bit laughable at points, although that was since the oral sex came off more like Nao was, I dunno, slurping down noodles. But the threesome in the first episode with Daisuke and his two classmates was epic – they covered a LOT of different positions in that (I’m pretty sure the only holes left unscathed were the ears and nostrils). All in all, the sex scenes were varied, and didn’t fail to entertain. The only weak scene came at the very end with Maya and Daisuke, which was perhaps about half a minute too long. And, outside of the weird hallucinated tentacle rape scene, it was all consensual.

The girls were fairly attractive for the most part. Nao and Kanae were so-so, but the remainder were pretty cute. Maya reminded me of a character from another show, although I’m not exactly sure who (I’m leaning towards Limone from Simoun). Momo was very cute.

I actually noticed the music, which is pretty surprising for a title of this nature. Gotta love sex scenes set to upbeat, tropical beach music, complete with steel drums!

Animation was fine, certainly nothing to write home about, but only because it was neither impressive nor awful.

I would recommend Resort Boin. It’s fun, there’s plenty of sex, and there’s a good deal of humor (not all intentional, but it’s still funny). Much better than the last thing I watched (Method of Coupling).