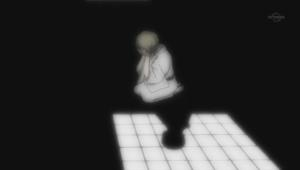 Check me while I angst.

I like this show. A lot. There wasn’t as much humor this time, but I did thi nk it was funny how Nyanko-sensei took on Reiko’s form. And it was a good episode.

I don’t usually like shows like this with one-shot type episodes (I thought Jigoku Shoujo was dull), but it manages to work here, maybe because the characters are mostly recurring, even as just background ones. Also, Natsume is a better lead for this kinda show than most are. Nyanko-sensei helps a lot, too.

I prefer these episodes with people who have had connection to youkai or Ayakashi to ones like the last one. So episodes like this and 2 = good for me.

I do wish that Sasada had gotten to meet Shigure again. And I’d like to know why so many of the Ayakashi vanish after their names are given back – are they dead somehow? Do they go back to some Ayakashi heaven thing? The only one who hasn’t disappeared afterwards so far was the Dew God in episode 2, and he disappeared a little while later anyway.