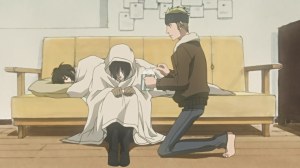 In which Gau is a whore and Yoite steals everyone’s food.

After Miharu runs off from the hospital, Kazuho worriedly calls Yukimi to tell him that both he and Yoite are missing. But during the call, the pair re-appear, and as Kazuho expresses relief and tells them to get changed, she is called to Gau’s room. Gau is standing by the window, and  he begins to speak, and says that he tried to find his mother while he was unconscious, but that his hands were too stained with blood to do so. He refused to stop searching, though, but Yoite’s kira pulled him back, and he heard Yoite’s voice beckoning. As he turns to Raikou, Raikou hopes that Gau will hate him and leave the world of Nabari. But Gau apologizes, and tells him he wants to stay at his side still.

Yoite and Miharu have watched this whole thing, and Yoite explains that kira can control circulation – it can cut it off and kill a person, or it can increase it and thus save them.

In the never-ending car ride, Ichiki and Hattori discuss Hattori’s vision for the world and the fact that it will mean that no more children will be unwanted like Yoite was. Ichiki asks for and receives permission to call in the Tattegami, although we do not learn who they are.

The next day, which happens to be Christmas Day, Gau freaks out over the state of Yukimi’s apartment. He and Raikou are meeting with Yukimi, along with Miharu and Yoite, to discuss the problem of Engetsurin and Kumohira – specifically, that both have vanished. Yoite hangs back at the door slightly, having last seen Yukimi when he threatened him in Banten, but Gau pulls him into the apartment without a second thought. The group begins to discuss Kumohira over pizza, and Miharu states once again that he knows nothing of Kumohira, truly.

Meanwhile, Yoite is silent in the corner, but Gau brings him a piece of cake to eat. Gau says that he can enjoy the smell even if he has lost his taste, and Yoite quickly eats it. Gau says that he wants to thank him for saving him, and Raikou says that he’ll return the favor somehow. Miharu comments that the cake is a little too sweet, which irritates Gau, but Yoite eats the rest of Miharu’s cake before Miharu can have any more.

At the hospital that night, Yukimi learns from Kazuho that Yoite only has a month left to live. The two discuss what appears to be the quiet plans of Miharu and Yoite to use the Shinrabanshou, although they know not to what ends. Yukimi wonders what people who can’t use it can possibly do for Yoite. As Yukimi seems to waver, Kazuho tells him to not do anything that would mean his departure from the Kairoshuu, as it is a place where the two of them were finally able to settle in. Yukimi, after a pause, tells her he understands.

Walking back from Yukimi and Yoite’s apartment, Gau tells Raikou what it felt like when Yoite saved him. He stops in the lamplight from a streetlight, and asks Raikoi to help save Yoite. Raikou asks how they can do that, and Gau admits he doesn’t know; he just wants to save Yoite.

Yukimi gets back to the apartment and trips over a shivering Yoite as he walks in. Yoite has a fever, and Yukimi angrily tells him to do more about himself when he doesn’t feel well. He drops a blanket on him, and gets him some hot lemonade at his request. Yukimi questions Yoite about what he and Miharu have planned for the Shinrabanshou, and ask if they intend to save Yoite’s life. Yoite doesn’t respond, and Yukimi angrily pulls the sheet that had been hanging over Yoite’s face away, demanding to know why he learned the kira if he knew he was going to die from it eventually. Seeing Yoite’s blank face, though, Yukimi suddenly stops.

After Yoite has gone back to sleep, Yukimi works at his computer and thinks about Yoite’s past – or, what he knows of it from when Yoite came to stay with him. Hattori brought Yoite to live with Yukimi, and told him that Yoite was a kira user. At this point, Yoite did not have a name exactly – he hadn’t told it to Hattori, and he didn’t tell it to Yukimi. Yukimi was initially irritated, but when the kira began to affect Yoite the day after he came, he called Kazuho for help. The immediate effects of kira were to stretch Yoite’s bones and tear at his ligaments, among other things, so Yoite grew from a small child to a teenager in three days. At the end of it, Yukimi cut Yoite’s hair, and told him he needed a name. He thought aloud of a few names, and as he looked out the window, the name Yoite came to mind. But he said it was a weird name, like that for a cat, and yet Yoite liked it… so, Yoite it was.

In the present, Yukimi wonders who Yoite really is.

The next morning, Yukimi wakes with a start, falling out of the chair he fell asleep in. Miharu and Yoite are gone.

At the hospital, Yoite and Miharu confront Kazuho and demand the information she was doing research on regarding the Shinrabanshou. She refuses, saying that they are not permitted to see it, but Yoite fires the kira. When she tells him he shouldn’t because it’ll hasten his demise, Yoite says it doesn’t matter because he’s out of time anyway. Kazuho tosses Miharu a thick binder, and tells him that she had been working on Izura Shingan, the technique used by Oda from Tokagushi, as maybe being able to help open someone’s mind to use Shinrabanshou. Miharu and Yoite turn to leave, and Kazuho warns that it is only a hypothesis and could kill Miharu. But neither listens, and they leave.

Miharu and Yoite begin to make their way to Tokagushi to find Oda, but on the way it becomes apparent that Yoite has lost his sense of smell.

Elsewhere, the Tattegami make their moves, killing two people. Afterward, they meet with Ichiki, who identifies them as the Kairoshuu’s secret intelligence unit.

Hey, can I gush about that hyper well-animated snow again?

Up until this point, I hadn’t really wondered about Yukimi and Kazuho’s past, but now I am a little. Their discussion about Yoite and Miharu seemed to reveal that they joined the Kairoushuu out of a lack of anything more concrete to belong to in their lives, not because they truly believe in Hattori’s ideas. So, it seems that they don’t really have any family themselves (although Kazuho is married), which brings to mind Raimei and Raikou – that Yukimi’s given name is Kazuhiko and the sister is Kazuho also makes me see a parallel in that they have similar names like Raimei and Raikou. Regardless of their past, though, I see their roles becoming increasingly complicated, given their involvement with Yoite over the years and the fact that they seem to not completely believe in Hattori’s vision; Kazuho didn’t seem to put up much of a fight at the end, which is worth noting, since she is a ninja after all – even if she isn’t very good in combat, surely she would’ve tried harder than she did to keep the information from Yoite and Miharu if she really believed in what the Kairoushuu were doing.

Whenever Kumohira’s national origin is mentioned (Ireland), I sort of wonder what the original manga-ka (Yuhki Kamatami) was thinking – after all, usually gaijin in anime are either Chinese, French, American, or, very very occasionally, British. I can’t bring to mind any character other than Kumohira in anime or manga who is Irish. Makes me think of Atl from Tenpou Ibun Ayakashi Ayashi, since she was the only Mexican anime character I’ve ever run into.

By the way, does anyone else find it strange that Kumohira’s grandfather was a Japan fanatic, and that is why Kumohira ended up as a ninja in Japan? I mean, his grandfather would’ve lived through World War II, and, well, Ireland was technically neutral, but it provided serious support to the Allies. So this doesn’t exactly jive. Oh well, I suppose it is anime, after all…

Oh, and if you’re wondering about my ‘Gau is a whore’ comment earlier on, its because he told Raikou he wanted to always be at his side, but then blushed a bunch at Yoite later; geez, Gau, way to be a tease.

1 Response to Nabari no Ou Episode 19