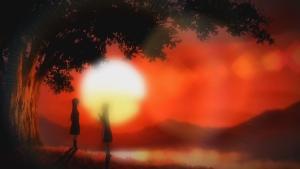 Enma Ai is back, this time with artsy yuri and a shouta.

The story, of course, starts with the re-appearance of Ai herself, although initially not in full physical form. Kikuri possesses a wind-up doll in a toy shop, and sets off, a blue butterfly ominously fluttering by the screen. Ichimoku Ren, sweeping up at a bath-house, turns to find a strange boy standing in the bath, and demands who he is – he is Yamawaro, and he tells Ren that Ai is back. Kikuri does the same to Wanyuudo, although it is Hone Onna who realizes for herself when a blue butterfly lands on her glass while she is at work, Ai’s reflection showing in the mirror behind her, and it is something which clearly saddens her.

At a junior high, some girls are passing notes, but their teacher confiscates it and writes them up in a notebook her carries. After class, one of the girls, Itsuko, insists that another of the girls, Akie, ask her father to speak with the principal about getting the teacher, Tange, in trouble. Akie reluctantly agrees.

Hone Onna is shown to be listening in, and Ren approaches her and teases her slightly. Later that afternoon, the pair, along with Wanyuudo, discuss what is happening. Wanyuudo wonders why Ai has returned, and the three agree that they’ll find out if they remain at the school. Kikuri and Yamawaro approach, and Kikuri tries to whack Wanyuudo with the insect net she is carrying, but is stopped suddenly and must ask Yamawaro to re-wind the key in her back – since she possessed a toy, she can’t move if she winds down. Yamawaro has taken to calling her ‘Hime’.

That evening, the third girl, Yuzuki, is visited by Ai while in the bath. Ai leaves her branded with a blue butterfly on her back, although Yuzuki thinks she was only dreaming.

The next day, Akie tells Itsuko and Yuzuki that she can’t do anything about Tange-sensei, and that he isn’t really bad after all. After she runs off, Itsuko convinces Yuzuki to help her with a plan.

That night, Itsuko hands Yuzuki a camera and tells her to make sure to take pictures of her embracing Tange-sensei in front of a love motel, as she has left a love letter in his mail box to entice him to come see her. But Itsuko’s plan backfires when she runs into her father and mother, who were informed by Tange-sensei about what was going on. In her rage, Itsuko contacts the Jigoku Tsuushin, although she tells Ai that its ridiculous that she’d have to go to hell to send Tange-sensei there. Nevetheless, a straw doll of Yamawaro remains with her.

Yuzuki awakes suddenly from a dream of what has just occurred between Itsuko and Ai. When she gets up, Ai appears in her mirror and tells her she’s in Yuzuki.

The next day, Itsuko misbehaves in class, and her mp3 player is confiscated. She storms out of the classroom, and later goes through Tange-sensei’s stuff in an attempt to find it. Tange-sensei finds her and claims he has thrown it out.

Yuzuki desperately searches for Itsuko, as she knows what is about to occur. But she is halted when Ai uses her to regain a physical form.

Itsuko angrily pulls the red string, believing that her future is ruined. Tange-sensei is taken to hell, although Wanyuudo and Hone Onna admit that it is more a matter of immaturity on the part of his students that this is happening.

Back at the school, Yuzuki is too late – Itsuko looks upset, but insists it is for the better of all. But Akie walks into the room to give Itsuko her mp3 player back, saying that Tange-sensei asked her to do so. The notebook Tange-sensei always wrote in lies on the floor, the pages all blank – he never wrote anything at all.

The next day, Itsuko transfers.

I’m still a little leery of how they’re going to pull this off, given that we were basically given closure last season by Ai’s salvation, but I’ve always really liked this series, so I’m still happy to watch. I am, however, annoyed that we have to deal with Kikuri again.

The animation has improved this time around.

I’m also a little wary because it looks like next episode takes place at the same school as this episode, and I really wasn’t crazy about the storyline at the end of last season where it was just all in the same place for several episodes – unlike a lot of people, I really like the fact that its mainly stand-alone stuff with a main thread, like in the first season with Tsugumi and Hajime.

I am curious to see what happens with Yuzuki, though – she’s featured in the OP, so she apparently will be hanging around. I also would like to know why the hell Ai’s come back.

I’m glad to see next episode has a guy sending someone to hell – we’ve had that maybe a total of three times before? It gets a little boring if every protagonist is female, after all.

Also, a shout-out to Aero Subs for being the only fansub group awesome enough to take this show on – believe me, us fans really appreciate it (also, props for subbing two shows I love and no one was subbing this season, because otherwise I’d still be sadly trying to hack my way through the first episode of Mouryou no Hako sans full comprehension).