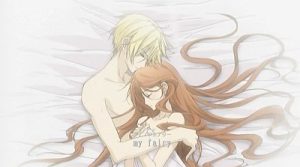 …Ok, or, maybe just shoujo that is willing to lead me to believe it’ll have some sex in it.

Hakushaku to Yousei is, admittedly, pretty silly so far. But its also pretty fun, and unlike a few other shows this season, it isn’t pretending to be anything meaningful – its just weaving its story as any show its type should, and keeping viewers entertained in the meantime.

Honestly, HakuYou is almost exactly the definition of disposable entertainment, but there isn’t anything inherently wrong with that, so long as it nails the execution. And HakuYou is doing that fairly well, even if it is making a few of us giggle along the way (so, apparently fairy doctors have the magical ability to breathe under-water? also, the talking cat is pretty ridiculous-looking, even if he is hilarious).

All of which to say that HakuYou is enjoyable thus far, but isn’t quite leaving an impression – bet on this being a show you watch and forget you ever did about six months later.

This entry was posted in A Day Without Me, Uncategorized and tagged anime, hakushaku to yousei. Bookmark the permalink.