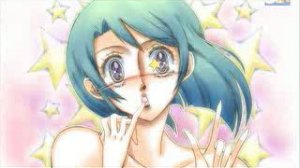 That’s right, bitches – I typed up the title properly.

Alright, first off, let me all tell you something – this isn’t yuri. Yes, Kanako, our leading lady, professes to only love girls, and, yes, she hanyans (lord, that’s one I haven’t heard in a while) over all the girls she meets in the course of the first episode. But this is about as yuri as OtoBoku was – if Kanako ends up with anyone, it is clearly going to Maria, and, folks? Yeah, Maria might look like a girl, but a trap is a trap – you might be able to pretend for a while that that is a girl, but there’s a dick below, so don’t get too excited, ok? The trap guy in OtoBoku eventually got exposed, and I know seeing fake boobies on him made a bunch of people sad, so try not to get too happy about all this.

Well, now that that is out of the way, I did enjoy the first episode, because it was totally lulz-worthy – thank god this thing doesn’t look like it plans on taking itself seriously. I didn’t do any actual laughing out loud, but I was smirking fairly constantly. Acidic traps aren’t terribly common, so although the ‘seems sweet, is rotten’ character type has become more prevalent, I found this incarnation amusing. I also liked Kanako despite myself, as her SD and 70’s shoujo moments were hilarious (as was the MariMite send-up early in the episode)

I also liked this for stuff that, well, won’t really matter to most people watching it, I suppose. I couldn’t find any caps of it, but the first few minutes are practically a love-letter to Shoujo Kakumei Utena (particularly the movie version) in terms of animation – I went back and re-watched it a second time to make sure my eyes weren’t deceiving me (and I could practically hear the Akio car and the Shadowplay Girls!). There were also a few other moments scattered throughout that were reminiscent of SKU’s animation/art, and I kind of melted each time because I’m a loser like that.

Anyway, Maria†Holic  is nothing great, or, honestly, good – its funny, but not outrageously so, and  the heavy-handed fake-ish yuri bent might get old pretty fast, but for the time being I think I’ll keep watching.

This entry was posted in A Day Without Me and tagged anime, maria†holic, mariaholic. Bookmark the permalink.