Issues of Morality in Jigoku Shoujo 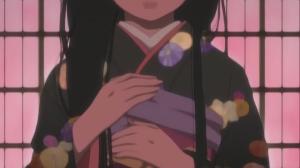 In which the moral issues surrounding damning someone to hell are examined, and I (briefly) talk about why I dislike Death Note despite enjoying the somewhat similar Jigoku Shoujo.

I suppose my interest in Jigoku Shoujo is largely connected to my overall interest in religion, and by extension, morality – in fact, it is the morality portion of the equation which could truly hold the key to my enjoyment of the Jigoku Shoujo franchise over the years, despite the fact that many complain of its ceaseless adherence to formula. There are other factors in my continued dedication to the show, but it is this one that is perhaps most relevant given what I wish to address in this post. I would like to state before I continue, though, that even as I profess a love for Jigoku Shoujo, I feel that the issues of ethics and moral it brings to the surface aren’t entirely intended – yes, there is a degree of discussion it wishes to provoke, but only insofar as that will gain it greater visibility as a commercial product, not as a philosophical tract; I cannot grant it more depth that that, although I’m sure I would wish to.

Jigoku Shoujo presents us with a fairly simple morality play – there exists an otherworldly girl, Enma Ai, who will ferry to hell whomever you designate for such a fate should you be emotionally and/or physically tortured to the point of such desperation as is generally required for completing such an act as damning someone. However, in damning someone to hell, you yourself become one of the damned, and upon your death you will serve eternal penance in hell. All of which leaves us with a set of questions, perhaps most importantly of all: does a victim deserve damnation for punishing their enemy?

This ends up being the first question off the bat by necessity, and is the primary question we find in the first season, and then in the first two-thirds of the second season (admittedly, it is largely absent from the third season, the Jigoku Tsuushin generally having devolved into a destination for flustered teenagers with poor motives – I will not be examining this). After all, for the most part those victims of this portion of the show have truly suffered grave injustices at the hands of the aggressors. For example, in one case a newly married woman contacts the Jigoku Tsuushin due to her mother-in-law’s psychological and emotional torture of herself and her husband; when she pulls the string, it is as the woman swings an axe down at her. Similar cases populate these episodes, and one can hardly blame the victim for ultimately pulling the string, for one is certainly meant to feel sympathy for the unfortunate soul who feels that there is no option other than to seek out Jigoku Shoujo.

Interestingly enough, that answer varies by the religion in Japan you are considering it within – and, perhaps even more curious, despite the fact that most Japanese citizens enact Shinto and Buddhist rituals, the two give answers that are almost diametrically opposed. Shintoism is a religion that is usually applied to a variety of folk beliefs throughout Japan, with minor deities and spirits that can vary from place to place, but it is unified in its creation story and the idea that the sun goddess, Amaterasu, established the monarchy in Japan. Shintoism’s main idea about sin is that it is a sin to be unclean – sin thus can be removed through purification rituals, and actions leading to impurity are not evil, per say, but simply actions that must be cleansed away (this is, admittedly, a bit difficult to explain – I’m trying to not get into the gory details too much). If I may quote from Wikipedia on Shintoism’s feelings toward murder, “Killing living beings should be done with reverence for taking a life to continue one’s own and should be kept to a minimum.” However, the operative word here does happen to be ‘should’ – thus, it is not necessary, although the mass murderer would have difficulty under Shintoism finding purity given the mass murderer’s disrespect for human life. However, under this rubric, technically the victims in Jigoku Shoujo need not seek purity (there are some interpretations that would insist they do so, but the following is still true even under these), as they themselves did not directly pollute themselves – instead, it is Ai and her compatriots who have soiled their hands and become impure.

On the other hand, we find Buddhism. Buddhism’s dedication to nonviolence is fairly well-known, and it is from here that we can clearly conclude that the victims in Jigoku Shoujo are clearly sinners themselves, and they must do something to counteract their deed in order to ensure a karmic value of zero at the end of their lives – or, at the very least, a positive one so that they might move up in their next incarnation instead into an even worse position (a karmic zero means one breaks out of the reincarnation cycle and reaches nirvana; ideally, all Buddhists seek a zero value because of that). However, taking a life, even if indirectly such as in Jigoku Shoujo, is something that one can truly never counterbalance, no matter how good of a person someone is otherwise. (I will admit that all of this is a bit of simplification, as some forms of Buddhism assert the existence of hells and heavens to which one can be reincarnated into – I would suggest that the Jigoku Shoujo eye for an eye system probably draws on this.) Thus, the victims of Jigoku Shoujo aren’t truly victims, for they themselves become the aggressor when they complete the contract by tugging the thread and sending their tormentor to hell; they get what they deserve.

To pass out of the world of theology and into my own interpretation of morality, I believe that, ultimately, the victims are wrong to pull the thread. However, I can understand where they are coming from, and do feel sympathy for their plight, even their own fate in hell. But this does not excuse that their own action is in itself sinful, and in some ways does little to differentiate them from their enemy. At the same time, though I do not feel that they should be damned to hell, as it seems a particularly cruel fate given that in sending their aggressor to hell, they have gained a respite from their torture in theory – but in actuality, it seems that it can only be but a shadow of a respite, for who can truly enjoy their life if they have the prospect of fiery damnation hanging over them? I’m sure some can, but I don’t think I myself could truly ignore such a thing in its entirety, and I honestly doubt that anyone could, barring amnesia (the psychological theory of repressed memories is something I am little convinced by).

There is also the issue of whether the villains of the (half) hour deserve their damnation to hell, excluding those who are very clearly undeserving of such a fate, such as the young nurse near the end of the first season. Some of these people are truly horrors in their own right, cavalierly wreaking havoc on others’ lives for personal gain, whatever that gain may be. But then there are a few whom I would argue are, yes, awful, but given a few years would grow out of it – these being the schoolyard bullies of the show. As for those who have passed the point of being able to claim lack of maturity, even then I do not believe that they should – they should be punished, but I cannot agree with sending them to hell, as I am morally opposed to the taking of life for any reason (theoretically – if push came to shove, I will admit that if someone were pointing a gun at someone else, and I could kill them and prevent their taking of the other person’s life I would, although I cannot say that I could do the same were I the one having the gun pointed at me, howsoever curious or not that distinction is). I’m probably too idealistic, but I believe that there has to be another solution in these cases.

Now, I know I promised to touch on why I dislike Death Note even though I love Jigoku Shoujo, so I’ll end in straying from the arguments regarding morality briefly. However, this does relate, as it does involve the subject of morality. If you look at it briefly, Jigoku Shoujo and Death Note have two similar devices – in Jigoku Shoujo, every episode an unfortunate soul gets the opportunity to send their enemy to hell; in Death Note, Light gets his hand on a Death Note, thus allowing him to kill people however he pleases. If Light and the victims in Jigoku Shoujo are doing similar things, then how come I’m willing to let it slide in Jigoku Shoujo, but can’t stand it in Death Note?

Ignoring the fact that the JS victims are, well, victims, and that Light is a megalomaniac creep, I found my distaste for Death Note came from its structure of morality. Yes, Light does end up getting his just deserts, but the process is very drawn-out, and even as he is portrayed as an unpleasant person, Light and his quest come across in a fairly glamorous fashion. On the other hand, the punishment the victims face in JS is made explicit from the outset (or, rather, that they will face punishment is explicit, as hell itself is left overall intentionally vague); their actions are not glorified at all. I could recognize that Death Note definitely is a solid production, and it possesses intricate plotting, but I still dislike it because that sort of moral structure simply doesn’t sit well with me (I’m alike bothered by the fact that, even as we are expected to go ‘oh, that’s not right’, Death Note really inspires no true discussion of ethics and morality in the modern world, because Light’s just so cool, guys! is the overwhelming sentiment one is intended to receive from it – not that this should come as a huge shock, as this was a Shounen Jump title, and while it did possess more depth than many titles from the SJ fold, it still had an audience of adolescent and pre-adolescent boys).

To return to the original topic at hand, the latest season of Jigoku Shoujo unfortunately strays quite a bit from the original questions provoked by the franchise, and I couldn’t honestly say what exactly we’re supposed to or could be questioning based on this season. This season instead seems more like a users’ guide to what constitutes abuse of the Jigoku Tsuushin. But there’s still half the season left, so there’s definitely time for more questions to pop up that relate to the real world (no, why Ai came back or whether Yuzuki is going to be the next Jigoku Shoujo do not relate to the real world).

2 Responses to Issues of Morality in Jigoku Shoujo