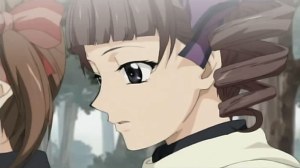 I think that the latest two episodes of MariMite quite possibly are the best episodes I’ve ever seen from MariMite across all forty-one (!) episodes that we’ve seen so far. Given that I’ve loved MariMite from almost the word go, this is saying something – it just keeps getting better! Most shows degrade over time; in fact, most forms of media franchises in general degrade over time, as anyone who has read something like Inu Yasha or watched the Jurassic Park sequels. Stuff just doesn’t tend to do well the longer you stretch it out. That MariMite by and large simply keeps getting better is a testament to the strength of the franchise as a whole – we have very solid light novels as the source material in the hands of a highly capable set of writers, directors, and producers.

One of the things that I think elevates these episodes is that, honestly, Touko is probably one of the most interesting characters that MariMite has to offer. I would compare these episodes to Sei’s episodes in season one, as I feel that both Sei and Touko are very complex characters in ways which the rest of the cast generally aren’t. I have nothing against any other cast members (another strength of MariMite, since its very difficult to have a wholly likable cast), but, at least in the anime form, Touko and Sei are bounds ahead in terms of depth and development.

One of the differences I see in Touko’s character versus the others is her deliberate obfuscation of the issues at hand – usually when other members of the cast are bummed, its excruciatingly clear to everyone else. Meanwhile, Touko does her best to behave in as abrasive a manner as possible to keep others away. Its a tactic that works very well, considering that most people watching MariMite~Haru~ immediately thought ‘bitch!’ when they saw her in action. And it kept us from realizing that Touko was fairly fond of Yumi from the get-go, as evidenced by Touko’s internal admission of having first seen Yumi during the previous Valentine’s Day card hunt and become interested in her at that time. (Again, I see parallels between Sei and Touko in this behavior, as Sei was pretty unpleasant herself to those around her in the Yamiyurikai when she was a second year.)

I also find these episodes particularly interesting because Touko’s issues are ones that are, honestly, a bit more… weighty than those of the other young ladies of the show. Yumi’s issues have largely had to do with her relationship with Sachiko, and same goes for Yoshino and Rei. Sachiko did have the health of her grandmother weighing on her at the end of Haru, and Sei did have the entire sexuality thing going on, but by and large the problems of our core cast haven’t had quite the same level of implications as the newfound knowledge that Touko is not biologically the daughter of the Matsudaira’s. Questions of lineage simply seem more important than the back-and-forth between girls who are miscommunicating.

Anyway, to return to episodes ten and eleven themselves, I do think that what also works in these episodes favor is that we are finally having a true departure from the Yumi-centric nature of the remainder of the show. Yes, in the past we’ve had arcs which focused on other characters, but up until these episodes we haven’t really gotten in the heads of the other characters in such depth since Sei’s arc toward the end of the first season. Yes, we watch the other girls have their various issues, but we don’t quite step into their shoes as we do into Yumi’s throughout the series (which is understandable, though, given that Yumi is truly the lead of the show). But here we find ourselves really seeing things through Noriko’s and Touko’s eyes.

I also have really enjoyed the amount of time we’ve spent with Kashiwagi this season, as he was pretty one-dimensional to this point – hey, look, it’s Sachiko’s cousin/fiancee who hits on Yuuki! Wow, he’s such a jerk to Sachiko, isn’t he? The conversation in the bathroom between Sachiko and Kashiwagi was particularly illuminating, and shows growth on both their parts, as Sachiko has evidently come to accept that Kashiwagi cannot love her, and Kashiwagi handles the entire situation in a manner so entirely unlike how he dealt with it when we first met him (and where we came away with a distinctly sour feeling regarding him). I would say that this scene truly shows us two young adults, not two teenagers.

Yumi also was shown to have grown quite a bit, as displayed by her handling of the Touko situation. She got pretty upset a few episodes ago, but she reached an even keel in these two episodes. And when Touko brutally brushed her off again in episode eleven, she handled it as her season one self simply could not have – she basically told Touko to calm down, and then she left to help diffuse the tension.

On a somewhat silly note, the animation for these two episodes was a little ridiculous, at least as far as Touko’s hair went. The animators went nuts with her hair! It looked bigger and more ridiculous than ever! It just sticks out so much in a show like this which is so slice-of-life on every other count.

Another aside – Shimako and Noriko are so outrageously gay for each other. I’m sorry, but girls don’t blush when they admit that they want their friend to find their Valentine’s Day card to win a date with them if they feel simply platonic about each other. You can mark them off as most likely to be lesbarus together after the show ends (others in the running: Rei and Yoshino). I’m all for YumixTouko-ness, but at the same time I don’t see it as likely, even though Touko’s watching Yumi from behind a tree and then wanting to get to know her as a result could be spun as fairly yuri-flavored.

Anyway, I’m really looking forward to the final two episodes of the season, as twelve comes up next week followed by thirteen the week after. I find the dynamic between Yumi and Touko to be extremely fascinating to watch. But I’m also dreading the end of a franchise I’ve so grown to love, as the novels are poised to have ended, and I believe that the remainder of this season will cover what is left in those novels. Maybe we will get a Buddha-sama ga Miteru from Konno Oyuki now? Haha, fat chance, but I’d love to see Yuuki’s school-life in similar fashion as we have seen Yumi’s (and, yeah, sorry, I’m a raging BL loser who wants to see some more Kashiwagi macking on Yuuki action).