I’m tired of these nambly-pambly posts about what anime/manga pairings people support. So, because I’m stuck here with a busted ankle and infected knee (thanks, Army), you can get ready for canon couples that make me wanna hurl and watch something violent, like Platoon. Or X/1999.

I’d like to note that this is specific to CardCaptor Sakura, as opposed to Tsubasa Reservoir Chronicles.

Blech, too much sugar. That really is my main issue with this – and it happens too easily. But, mainly, its the fact that its so candy-sweet and everything. Rots my freaking teeth out. Dammit, Clamp, I liked CCS, but this was a bit much for me – couldn’t you have at least retained some of your mopey emo-angstfest characteristics from X/1999, Tokyo Babylon, and the like? Or just straight-up made Sakura x Tomoyo canon? Fail. 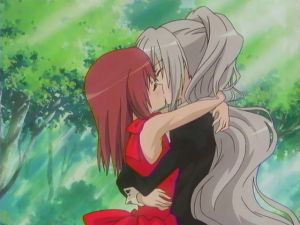 NO!!! Why does the best friend always lose?! Anyway, I dislike this pairing because I dislike Shizuma, mainly. Also, Tamao treated Nagisa way better throughout the series than emo-fest Shizuma did. But, yeah… mainly its because I don’t like Shizuma. She started off by being a seductress, which is fine, but then she just turned into this massive roving piece of ‘woe is me’. If it weren’t for Amane, she’d easily be the worst character in the show.

Akihiko is a massive, raging creep. All he ever does is coerce Misaki into sex and molest him. I’m sorry, that isn’t cute – its disturbing. And I was irritated that the anime version spent so much time on this obnoxious scenario. 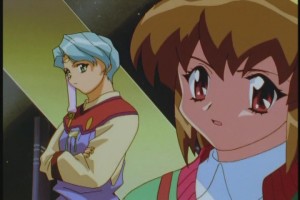 Boo, Akari x Ichino every day over Akari and Kris; admittedly, this is more canon in the manga than it is in the anime, and I would say that it works in the manga (to an extent), but its absolute crap in the TV version. Kris comes across as utterly deranged for the most part in the TV incarnation, although I will admit this lessens as time passes. And Akari for her part comes off as fairly uninterested.But this would be another case where I largely don’t support because I’d rather slash the best friends. 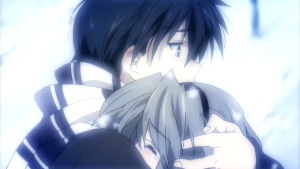 Yeah, so only canon in the one episode Tomoyo After special.

I’m not a huge Tomoyo fan – yeah, she’s ok, and, yeah, I love watching her kick Sunohara in the face, but I think she’s probably the weakest overall of the Clannad girls. Her character is fairly boring and really doesn’t do anything to stand out from a million others similar to her; quiet girl who can kick ass. I think she was called Mai in Kanon. I just find her to be pretty bland, and I don’t think Tomoya makes any remote sense with her – let’s be honest, at the end of the day, the visual novel was made for Nagisa x Tomoya.

Why ship when you can train? 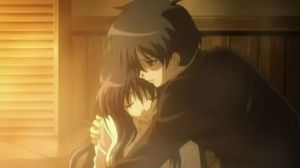 Sana was boring and tried to kill himself. Nanaka was a bitch, then crazy, and tried to kill herself. Sounds like a match made in heaven. It probably says something that my favorite couple of the show (Myself; Yourself) was the twincest couple. Sana was simply too dull and Nanaka too unlikable to be able to carry a show as the lead couple – even a show as crazy messed-up as Myself; Yourself (incest. murder. domestic violence. suicide. animal sacrifice. the list goes on and on…). 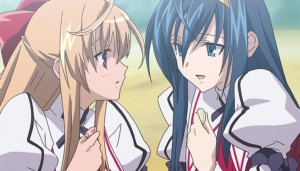 Because I don’t care what the justification is – rape cannot be equated with love. Go check them out in their Kyoshiro to Towa no Sora form if you’re looking for a real couple that isn’t demented… and doesn’t require that you think sexual harassment of any sort means the aggressor loves their victim. 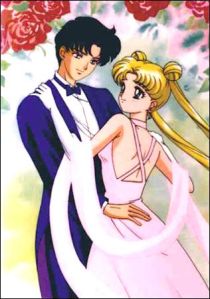 These two had pretty much zero chemistry in the anime version, and, honestly, the manga really wasn’t that much better. It seemed like the whole Silver Millenium back-history thing existed almost exclusively to give a logical reason for these two to be together, since, really, it didn’t make much sense otherwise. Its also a fairly boring couple; I rooted for Taiki when I watched SM Sailor Stars even though I knew it had no chance.

Ladies, take note – true love means a guy will denigrate you and call you an idiot at every opportunity. Obviously. But since Karin’s first love was a reverse trap, guess she had to settle.

As an aside, I seem to have a thing against couples in series where their future children make an appearance.

I really dislike Kaname – he treats Yuuki like she’s a child, and seems to regard her more as a doll he desires to own as opposed to a young woman he loves. His machinations behind the scenes and his intentionally keeping Yuuki in the dark about everything really grates on me; Yuuki’s an independent human being (err, vampire), she doesn’t need some guy acting as her handler. Kaname’s a control freak. It isn’t romantic, its irritating, domineering, and startlingingly regressive. Hence my supreme dislike for this canon coupling.