Inu Yasha: The Final Act at a Glance 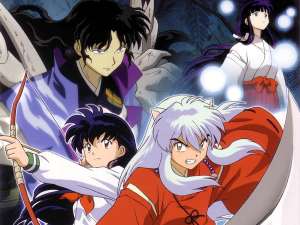 Other than glo, obviously.

But, hey, lets be honest – Inu Yasha still has enough popularity in Japan that it could have a sequel five years after its first series concluded. I know that the manga just wrapped up, but, even so, not many anime get sequels once more than a year passes.

Well, I can safely say that Inu Yasha retains its ability to be completely accessible – I haven’t seen an episode of Inu Yasha in years, and I know I got nowhere near the end of it (my approach to it was to watch a few episodes in a row, and then wait a month and watch a few more from twenty episodes later), but I didn’t feel even remotely confused. I didn’t know all the characters, but I really didn’t care – the heart of the story was still there, and totally unchanged like in all the previous 167 episodes: Naraku is bad, the Shikon jewel is in a zillion pieces, half the cast is actually dead, and Kagome is totally going to fail at getting into a high school.

There really is nothing new to say about this sequel. It picks up exactly where the first series left off; although we see every single freaking character ever in this episode, it isn’t really a re-introduction or an introduction – we’re expected to know who they are. Its a fairly seamless transition, which in many ways is kind of amazing considering the passage of time in the real world.

Inu Yasha has never really been a show I’ve loved or anything; if anything, its the thing I watch when I’m bored and there’s no one around to harass. And it looks to be exactly the same with this. Nothing exactly wrong with that, just don’t expect it to be fast-moving at all, and don’t exect the characters to actually, y’know, develop with the passage of time.

Anyway, hearing Do As Infinity again was, admittedly, AWESOME. I wasn’t too impressed with the song, but it was still great to hear them again. I actually liked the ED a bit more; the animation for it was much more interesting (drifting cut-outs ftw), and I also liked being able to compare the animation from the original series with the animation for the sequel. It is pretty impressive how much quality has improved for TV series with average budgets. The fight scenes are much more fluid here than in the first go-round, although shots involving fire still look pretty rudimentary.

But, none of this episode is anything too exciting… unless you’ve been patiently waiting for someone in Japan to have decided this needed to happen as a TV series. I’ll probably watch the whole thing, but doubt I’ll follow it avidly.

This entry was posted in Uncategorized and tagged do as infinity, inu yasha: the final act, inu-yasha. Bookmark the permalink.

5 Responses to Inu Yasha: The Final Act at a Glance