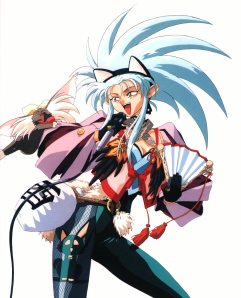 Sometime overnight… I got my 100,000th hit! Holy shit! This calls for a celebration!

I was quite happy to use a Tenchi Muyo! image, as I still revere TM! for being one of my earliest anime, and still find it extremely entertaining. It makes me a bit sad, in fact, that it no longer is one of those ‘gatekeeper’ anime – used to be everyone basically had to watch it for whatever reason in order to be part of anime fandom. Ah well, I guess even someone like Tenchi these days is too strong of a harem lead (if TM! were a more recent creation, it would’ve had to have been done by KyoAni, since Tenchi isn’t totally useless and is actually pretty nice… therefore, he couldn’t really come from another studio’s harem show!).

Anyway, I digress (although I will point out that there was a very quick and clever TM! joke in Seitokai no Ichizon’s first episode). I hit 100,000 despite having not posted in a few days, which makes me feel a wee bit guilty – at the very least I certainly could’ve given all of you something decent to have read to reach that mark! Ah well. I’ve been working on a script for a one-act play contest, so I’ve been a wee bit busy as of late. Last year I placed as a runner-up (two winners were selected), and I would really like to improve upon that finish.

In other news, I scored 277 on my military physical fitness test. I know this is essentially Greek to most of you, but I’ve been working my way toward improving my score, and that represents an improvement. The scale is 300, and the minimum passing score is 180. BOW DOWN BEFORE MEEEEE. Wanna criticize me? Well, I can do more push-ups than you! I once used that as an argument in class because some of my classmates are so insufferable as to not deserve decent answers; the person in question was absolutely baffled by this response to his argument, and I was thoroughly amused. However, I go to a very, very Southern school, so the manliest guy on campus is whomever is wearing the pastel-iest, most plaid and/or animal print covered pants with the most flamboyantly-hued shirt, complete with multi-colored Sperry’s and pink and yellow-striped socks, so… being able to do lots of push-ups doesn’t matter. I think it’d only matter if it somehow got you a better place to sit at the horse derby. Or is one of the fraternities had it as a test for getting into their frat!

…hmm. I don’t know where I was going with any of this? I think I’ll just list the stuff I’m still watching of this season:

Well, shit, that’s a lot of shows. Kampfer is edging toward being dropped, though, and I constantly have the urge to punch the love interest in Sasameki Koto. I also want to stab the female childhood friend in 11Eyes for only saying one thing over and over again (because I needed to know how many ways she can say/shriek/warble the hero’s name!). I dropped Nyankoi! because it ended up being epically stupid and a harem, and I dropped Letter Bee for allowing its more obnoxious elements (e.g. the pantsless loli) to kill its more charming aspects. And I haven’t started Aoi Bungaku yet, although it looks like pure, distilled awesome.

But, yes…. ONE HUNDRED FUCKING THOUSAND. The vast majority of the hits have come this year.

Oh, and my top search term for this year?

This entry was posted in Uncategorized and tagged AWESOME, Гамлет, hamlet, tenchi muyo. Bookmark the permalink.