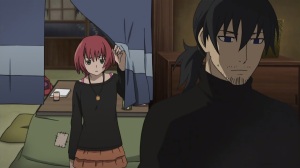 Because Hei could be a lolicon AND a shoutacon… if he wanted to.

Yay, Darker than Black – you took the potentially annoying trope of having a teenager as your main character and made it good!

Seriously, though, this has been a solid season for DtB. The new characters thus far have fit into the storyline very well; Suou in particular has been suprisingly likable as a character. I was quite worried Bones was jumping the shark on us by having a loli along for the ride, but she’s not even particularly loli-esque! I’ve also really liked the fact that they are utilizing characters we didn’t see a ton of last season like Hazuki. July might not be exactly fascinating, but thats ok.

I guess my only real concern here is that it doesn’t really seem like there’s enough time left to wrap up the story; maybe they’re planning on having another twelve set ordered if this does well? Probably not… but it does seem like there is still a LOT to cover, and they only have six more episodes to do it…

Anyway, I do have to call out episode six for having basically the most awkward emotional scene ever. Really, guys – I shouldn’t be laughing when people are mourning the death of a mother and wife.

Alright, I think that basically covers it. I hope that we don’t get some silly scheme with Yin, Suou, and Misaki all wanting to jump Hei’s bones, though, that’d be a bit ridiculous.

1 Response to Darker than Black: Ryuusei no Gemini Half-Season Review