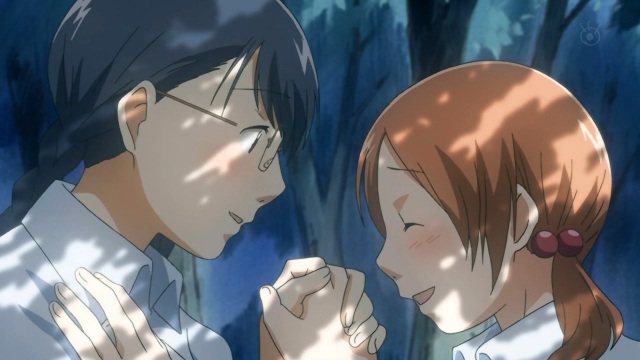 Not that that is always the case; it merely tends to be.

I must be honest and confess that I dislike the term ‘queer’. I understand that there’s been a reclamation effort for it that has been successful to the extent that the academic discipline is known as ‘queer theory’, but I still find the word to be grating and unpleasant. I really offer no alternatives to it, though, that have much… well, stickiness. Which is to say, I’ll opt for ‘LGBT identity’ but that itself is fairly clunky-sounding and is hardly desirable as a term to enter general discourse. So, seems like despite my own qualms, I’m not offering any true alternatives. As usual, it is easier to complain than it is to come up with solutions to those complaints.

And you notice that I don’t use ‘LGBT identity’ as the phrase in my post’s title. Ah well.

I went with an image from Aoi Hana for this post as it is one of very, very few manga that has a character who actually claims or names an LGBT identity. It is also one of the very few prominent yuri/BL/trans manga in which a character possesses an LGBT identity. I’ve run up against a few more recently (having bought half a ton of BL recently), but they aren’t terribly well-known and I don’t ever see them becoming well-known (titles like ‘No One Loves Me’ kind of make it hard for something to become at all popular, honestly, even if the volume itself was a legitimately good read). The fact is, manga generally shies away from putting a name to someone’s actions, as it is easier to not commit than it is to commit. Readers of yuri and BL also are themselves often resistant to having a character specifically identified as LGBT, whether out of homophobia or some strange high-mindedness about the nature of love or even out of their own sexual desires and fantasies (a quick glance at the market for girl-on-girl pornography is ample evidence for this latter bit). Those who wish for the characters to embrace an identity are generally willing to put up with it, and number smaller, apparently, than those who are in favor of the practice, so it all continues.

I have severely mixed feelings about the entire approach. And I am going to attempt to explain it all in this post, although I will caution that this may be a bit of a meandering/wandering discussion. For the first time ever, I am using notes to do a post; I’ve NEVER done this before. However, my ‘notes’ are still more a barebones listing of items to hit upon as opposed to a true set of notes. So I will forewarn you that this could loop around and zig-zag a bit. At the very least, however, I do hope it makes for an intriguing read.

Firstly, I do not find a lack of LGBT identity to be necessarily problematic. In fact, I enjoy the ambiguity and the lack of need on the part of characters to define themselves strictly. However, there are definite limits to this – I really, truly despise works in which characters make declarations of “I’m not gay/lesbian!” despite their engagement in homosexual love or desire and the whole thing isn’t played as the character in question being in denial. Denial is one thing, and is actually kind of natural when dealing with characters who have no previous experience with homosexual feelings. And it also isn’t wholly unbelievable either – with most cultures so oriented toward life behaviors tied to heterosexuality (get married, have children), there are individuals in real life who only have light dawn upon them when they are well-advanced into adulthood. Denial is only the most natural of reactions.

So – denial in and of itself isn’t troublesome. Its when the denial is emphatic and is seemingly fully supported by the narrative – that, no! This guy isn’t really gay! This woman isn’t really gay! Its just this one time! Even if it is true love and happily ever after, etc.!

Quite frankly, it comes across as stridently homophobic. It also can play as an argument for the notion that a person can ‘convert’ someone to homosexuality (and, therefore, that it is possible to convert out of it), as these stories a good amount of the time also involve sexual coercion and assault. Well, would you look at that – he just managed to get his dick up that other’s one’s ass! Now all the other one wants is his dick! He turned him gay, huh? Or, at the very least, he made him want only him and no one else.

So: pretending that your characters aren’t “really” gay despite their actions throughout your entire narrative? Obnoxious.

Then there are the stories where it just isn’t defined at all. No one says they aren’t gay, no one says that they are. This is actually a decently common trope in manga that do no fall under the headings of BL or yuri, and it is understandable that this matter of identity isn’t addressed in most of them as the characters tend to be supporting characters, not main characters. Of course, this raises the question of why LGBT characters cannot, apparently, be main characters, but that is a whole other kettle of fish, so I’ll leave that one alone.

I’ve heard complaints about shoujo’s resistance to putting a name to characters who have homosexual behaviors and feelings. I can understand the frustration about it… yet I actually don’t mind it when this happens, honestly. In fact… I actually kind of like it. Because with this, then, the thing that is important is that they love a particular person, not that the particular person is a man or a woman or a girl or a boy. Its actually a fairly lovely concept, in that sense: it seems to suggest that you could strip away everything about the person save their soul, and they would still be loved by this other character.

It also suggests that the story is taking place in a world where it wouldn’t matter what the gender of one’s object of affections was. These characters don’t seem to have any issue with the fact that they have a crush on or are in love with someone who is the same gender as they are. The characters around the character in question also themselves don’t generally show any consternation over the fact that their friend/sibling/classmate/co-worker/etc. is interested in someone of the same gender. If there is any consternation present, it’ll be over something unrelated to the gender – the other character is interested in the character, or the other character can’t believe the character is hanging all over so-and-so again.

Now, this isn’t always the case, I’ll admit that. Often, if anything, the LGBT-behaving character is in place simply for the purposes of humor. But when the character isn’t merely for the sake of laughter, its sort of like a fairy tale being constructed. Look – a world in which no one cares about who one loves. Isn’t it a sight to behold?

I’ll admit it: I’m being far too kind about these manga. I doubt that there was any intent to do such a thing when the authors set out to do their stories. But the end result is one where a person can read it that way if they wish to, regardless of what the author was thinking as they crafted everything.

And then we finally reach those few manga that actually have character who open their mouths and say “I’m gay/lesbian.” or have women who open their mouths and say “I like women.” or men who open their mouths and say “I like men.”. There really aren’t very many of these, since BL and yuri are not aimed at LGBT audiences. There are manga that are, but they are very niche and so there aren’t very many of them out there. They are also generally not classed in with yuri or BL. Manga featuring transgendered characters that are specifically about the trans characters are even fewer in number. Traps were a bit trendy for a few years, but let’s face it: traps are mainly a trope for humor or titillation. It is rare to see a trap get humane treatment in manga.

There are BL and yuri titles which do possess characters who identify themselves as LGBT. The aforementioned Aoi Hana and No One Loves Me (Yugi Yamada) both do. If I recall correctly, Octave does, too. FAKE, Hourou Musuko, Rooftop Scenery, Honki ja Nee kara, and Laugh Under the Sun all do, too. And Yamada’s Close the Last Door has a man who starts off claiming to be straight despite his longtime crush on his former kouhai and an affair with a man he meets at the kouhai’s wedding, but admits by the close of the first volume that he probably is gay. But these are honestly the only ones I can remember off the top of my head that had such characters in them, and I’ve read well in excess of five hundred different titles, at least half of which (and probably more) have been in the BL or yuri categories.

So LGBT identity in manga is rare, even if homosexual or bisexual or trans behavior is not. I did say before that I actually like the manga wherein the matter of identity is ambiguous at best, and that is true. However, it is also important to have characters who do embrace an LGBT identity because we do not live in a world where it doesn’t matter. It does, unfortunately, regardless of whether I think it should matter or not. And because it does matter to the world at large, it then matters to have characters who do identify as LGBT. It is hard for an LGBT kid in most places in this world; one of the few places to turn is often literature. Perhaps it sounds crazy, but reading about an LGBT character chips away at the loneliness that can fester for an LGBT youth, particularly those who do not feel that they are in a community or a family where they will be accepted. The characters may be fictitious, but they can be the first indication that one is not alone – after all, if someone out there is writing about LGBT characters, doesn’t it stand to reason that people like that actually do exist?

But, come on – doesn’t everyone nowadays know that LGBT people are real?

There is a difference between knowing and knowing, as absurd as that may sound. The former is more abstract; I know that the Sahara is sandy and that Afghanistan is dangerous. The latter is concrete; I know that snow is cold and that leaves change colors when the autumn comes. It might seem odd to seek concrete facts in fiction, but the act of reading a book is also an act of believing – one becomes so invested in fiction because the author makes it all real for the reader. Given that, an LGBT fictional character is real to the LGBT teen who is reading it. It is from here that the world may open.

27 Responses to Queer Identity in Manga