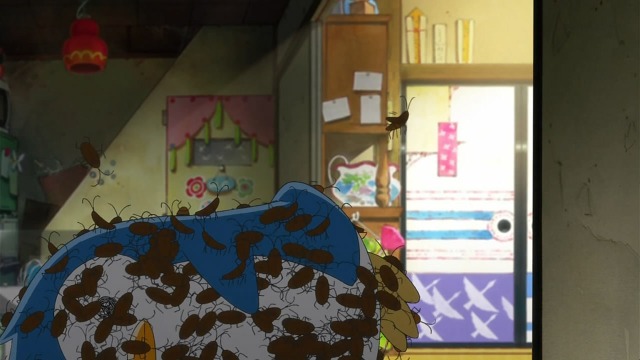 I’ll admit that the lack of episode this week tended me toward laziness on actually doing my episode post for last week’s episode, although I was also impeded by occupational duties.

…looking back on that sentence, I feel as though it bears mentioning that I actually talk like this in real life as well.

This week’s episode brought about a few major items, perhaps most importantly that the Takakura parents disappeared and did not die (as far as we know), and now Ringo is aware of the powers of the penguin hat.

Kanba feuds with his uncle over keeping the living arrangement of the children as it is; his uncle, understandably, would prefer to have the kids go live with other relatives, although he admits that they probably would be separated. Its a perfectly reasonable stance – can three children really support themselves and care for themselves properly? Kanba may think of himself as the man of the house, but he is still only sixteen years old.

Continuing with Kanba, he does get the money necessary to continue their ownership of the house, which was the uncle’s excuse to get involved this time. I say ‘excuse’ since I doubt that money was the sole reason he went to see Kanba; it simply provided a good opening. If you can’t afford the house, well, then obviously you have to leave, right?

There’s something rather suggestive about the scene where Kanba gets the money. Just take a look at the shot: 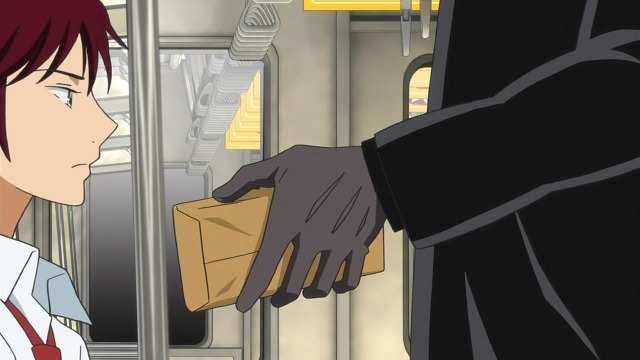 Of course, it isn’t necessarily literal prostitution, but I think its hardly much conjecture to say that it probably involves the selling of oneself at least on a figurative level. But this is far from a change in the current environment. The brothers are already more or less at the whims of the penguin hat, as ably demonstrated by Kanba’s extreme chase at the end of the episode. Little wonder that he gets hit in the face by the poster of the idol twins as he’s dragged; their screen on the train had warned earlier about not getting into spiraling debts (although the poster he is hit with is one which admonishes people to put trash in bags – is Kanba the trash in this configuration? or maybe the penguin hat? one could make arguments for both). Unfortunately for our protagonists, they’re already well into that spiral.

I noticed in this episode that part of Shouma’s apparent uselessness may be linked to the fact that he has, more or less, lost his role within the household. Himari is better, and so now she handles most of the cooking duties, a sphere previously held by Shouma. Kanba meanwhile takes on the traditionally masculine role of trying to protect the family. Where does that leave Shouma? Awkwardly trying to take on a more “masculine” role to little effect, as he clearly is no match for the strong-willed Ringo.

Some other bloggers have made reference to his penguin’s cockroach-spraying habit as itself symbolic of Shouma’s fecklessness. While I would agree with that assessment, I also think that the attempts of eradication of cockroaches points to a larger matter – namely that there is something rotten at the core of Himari’s resurrection and the current circumstances of the Takakuras. The brothers may be trying to salvage something “pure” out of it, but to do so is impossible. They are only fighting against a larger tide, i.e. the natural order of things. When something dies, it is supposed to stay dead.

Speaking of dead, the flashback at the beginning. It cuts off right when Kanba is about to be hit by the mirror. Maybe he was actually hit by the mirror, and he died, hence that moment as the cut-off point. The Kanba we know now is just his own soul’s delusion. I still like my theory of them having perished due to the sarin gas attacks best, though.

Speaking of which! The Marunouchi Line terminates in Ikebukuro, where the aquarium is. Ringo has a picture of her family in that aquarium which is very similar to the Takakura family photo there. “I come from the destination of your fate.”?

Also, has anyone else noticed that the eyecatches are moving the dot along one stop per episode so far? There are twenty-five stops on the line. If they move up one station per episode, it’ll bring them to Ikebukuro on the map. Keep in mind that the first episode had the eyecatch move from the first stop to the second, so it will terminate the line in the 24th eyecatch.

Regressing back a few episodes to Ringo and her theory about how curry was the first thing people ate… Ringo makes curry with apples. Eve gave Adam an apple (well, as I’ve said before, that’s not what the writer of Genesis was probably thinking of when they spoke of the Fruit of Knowledge, but apples have come to be identified with it probably since the Latin word used as part of the phrase describing the tree was “malum”, which can translate as either ‘evil’ or ‘apple’). Just some food for thought.

On the lesser side of things, HNNNNNGH NATSUME. She has a mildly yuri-type moment with Asami, whom she then presumably shoots in the head with some kind of memory-zapping device. While she may be using Kanba’s exes to take care of him somehow, I’m thinking she’s not herself an ex, although she may try to pass herself off as one. I think she’s got a bigger connection here, given that the ball she pulls from her pocket is branded with a penguin head. Maybe she’s trying to stop them from finding the penguin drum, although I’m not really sure what the point of shoving Asami down the escalator is yet. Although, was it really Natsume? After all, Asami says she saw “him” not “her” right before being pushed. But, then again, Asami makes no mention of “him” having pushed her, just that she saw “him”. THE MYSTERIES DEEPEN.

Finally, I’m not convinced Himari is Himari. She’s just been too passive overall, there’s something off about it. Is the penguin hat’s animating force really only present so obviously during Survival Strategy sessions? Color me skeptical. How do we know at all that this isn’t just the hat acting as Himari? The hat has access to her body and so her brain as well, so why not it just be the hat presenting itself as the “real” Himari based on her memories?

Anyway, for further reading, ch-check out E Minor’s post on the episode. He mentions some of the same stuff that I do but looks at it differently or has the same ideas but talks about them differently. Actually, in general, I recommend his blog; he’s got a very critical eye, and that’s fairly lacking within the blogosphere.

This entry was posted in Uncategorized and tagged IKUFUCKINGHARA, mawaru penguindrum. Bookmark the permalink.