As Fate Would Have It, These Are Not the Heroes We Get to See (But I Wish We Did) Part One

So Fate/Apocrypha has Jack the Ripper.

I’m bothered by this bit of information I recently learned from a fellow blogger; after all, how on earth is Jack the Ripper a warrior? Even though Gille de Rais in the Fate universe is apparently the murderous de Rais (although historians generally agree that while de Rais probably didn’t kill as many as it was claimed he did in his trial, they do believe he committed several murders), he nevertheless did fight with Jeanne D’Arc, so, yes, warrior. But Jack the Ripper? Really? Is it just that one must now merely kill people in order to be potential Fate universe bait?

Oh, yeah, and Jack the Ripper is a loli. Yep.

And it all brought me back to the fact that I find the most intriguing part of the Fate franchise to be the central conceit, i.e. that long-deceased warriors are raised up from the grave in order to do battle with one another. What a neat idea! Its the sort of concept which could go on for quite a while, so long as the creators didn’t run out of ideas of execution.

So who would I want to be included as a Servant? Jeanne D’Arc’s brief appearance was really what begged the question of me, in part because it was a sharp reminder that of seven Servants, only one was a woman this time around. Surely they could’ve included a couple more?

As such, my list ended up being mostly women, but I’ve got a guy in the mix as well. I tried to stick with figures who actually have at least some historical basis, although we know this isn’t necessary from the inclusion of folks such as Diarmuid and Cuchulainn in Fate/Zero and Fate/Stay Night. However, it was easier to set a limit for myself, and I also find the muddling of legend and fact for the figures of Fate-verse a bit fascinating, so I was happy to go with that approach. 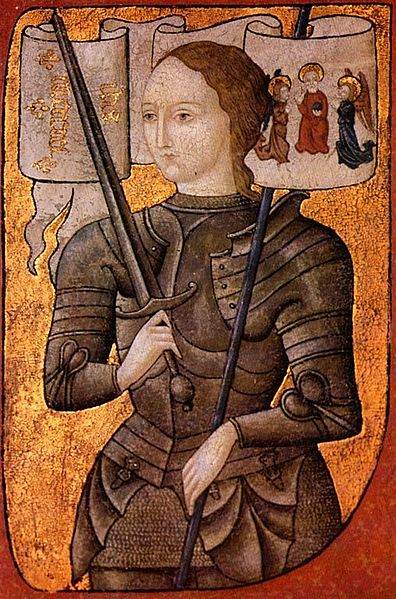 It seemed appropriate to start off with Jeanne given that we did catch a glimpse of her earlier in the second half of Fate/Zero. Jeanne is a fairly perfect candidate as a Servant; while it doesn’t seem to be an absolute requirement that Servants had had tragic ends in their lives, it certainly does seem to help. Burned at the stake in 1431 on spurious charges after being essentially abandoned by the French king on whose behalf she’d fought, Jeanne snaps into this mold fairly easily. Historians disagree on how much involvement she actually had as a soldier and leader, but in a Fate-verse story clearly she would be depicted as a warrior – in fact, we already have indication that Fate-verse considers her to have been such, as she is clad in armor when Caster meets her once again in the church as he perishes. Too bad they couldn’t’ve just included her as a Servant straight out. 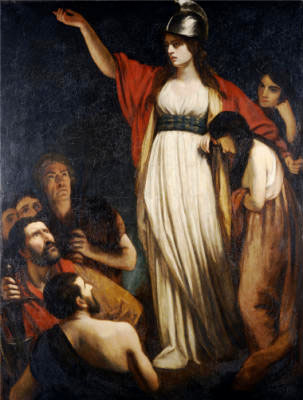 Boudicca was a badass. When her husband died in the first century A.D., he left his kingdom to both the Roman Empire and Boudicca, as well as his daughters. But the Roman emperor ignored this, and the kingdom was added to the empire as if it had been conquered. Boudicca was whipped by the Romans, and her daughters were raped. But Boudicca would have none of it, even with the odds greatly stacked against her – she started raising hell all over Britain, and Emperor Nero considered cutting his losses and calling it a day in face of her revolt.

Unfortunately, Boudicca and her fighters were defeated, and Boudicca’s exact fate is unknown – she may’ve killed herself to prevent herself from being captured, or she may’ve fallen ill and died in the wake of her defeat. Roman rule would continue for several more centuries in Britain.

In a Fate version of Boudicca, I see her falling ill as she and her remaining warriors retreated and attempted to re-group, with her eventually dying from her illness, her goal of banishing the Romans unfulfilled. 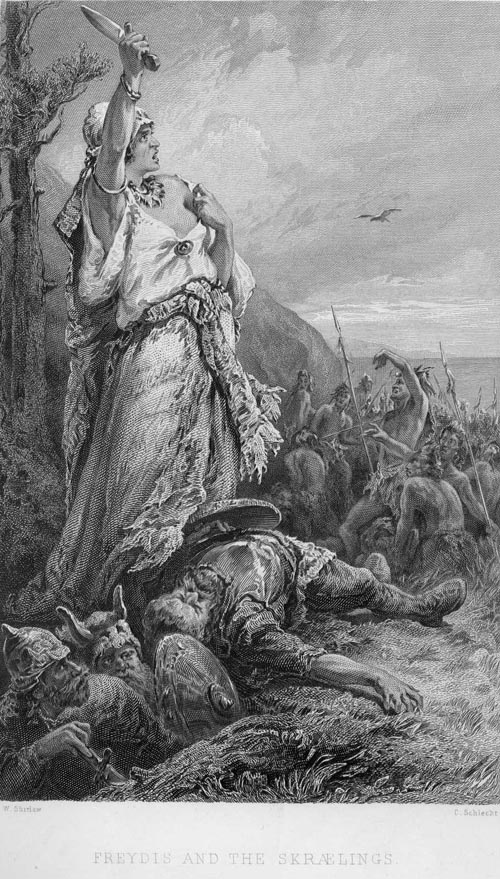 Ever heard of Erik the Red? Surely you have. Well, this is his daughter.

The historicity of Freydis is not a point of contention; it is agreed that she existed, but what we know her comes from sagas written long after her death. In the above picture, you can see why Freydis is, like Boudicca, a badass. Freydis came to live in Vinland, in modern-day Newfoundland, sometime around the year 1000. The Viking settlement of Vinland was an oft-tumultuous one, as the natives were extremely hostile to their new neighbors. During an attack by the natives (known as Skraelings in Old Norse), Freydis grabbed a sword from a dead man and repelled some of the attackers as several Norse men fled. What makes this more impressive was that Freydis was pretty pregnant at the time.

However, Freydis has a darker thread in her story, as she later betrayed two of her compatriots and some of her other companions. Freydis had made a deal to go back to Vinland to make her fortunes with two men, but signed on others behind their back; to handle the potential conflict, she had the two men killed in their sleep, and personally killed five women who were also a part of the party. She returns to Greenland alone, and claims the rest had remained in Vinland, but her brother Leif eventually finds out the truth. But he refuses to deal with the matter, as she is his sister, and that’s where her story peters out. In a Fate version of the story, obviously she would have had to get her just deserts, but bummed her brother out massively in the process. I see her as a more Caster end of the moral spectrum figure, although certainly minus the insanity and sans bloodlust; Freydis killed because she felt it necessary, not because the act itself pleased her, after all. 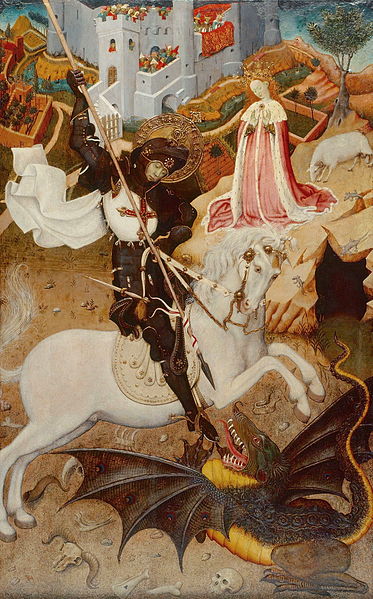 Typically known simply as ‘St. George’, he of dragon-slaying fame.

The story of St. George has enthralled me since I was quite young, having seen a sword dance of the martyrdom of St. George nearly every single Christmas from the time I was around six years old until I was fifteen years old. I have also seen it a few Christmases since.

The story of St. George and the Dragon is, ultimately, a story itself about his martyrdom, which admittedly can be a bit difficult to suss out. The princess represents Empress Alexandra, whom herself was martyred after St. George’s death, having converted to Christianity upon seeing St. George’s enduring conviction despite suffering torture and ultimately death. The dragon represents the devil and the Romane Empire – St. George may’ve himself perished, but he triumphed over these two in his death, having remained steadfast to the end.

St. George is a historical figure; he was a soldier in the Roman army who rose to a high rank and became part of the imperial guard for the emperor. He was tortured and executed for his refusal to sacrifice to the Roman gods, even after the Emperor Diocletian tried to cajole him with promises of riches; the emperor wasn’t terribly thrilled with having to kill him, as he was a very good soldier. So he may not have killed the dragon, but I think we can safely agree that this particular portion can be left in were he to be included in the Fate-verse.

I’d originally wished to do this all in one post, but, alas, bedtime comes a-calling. Part two to come either to-morrow or Saturday.

4 Responses to As Fate Would Have It, These Are Not the Heroes We Get to See (But I Wish We Did) Part One