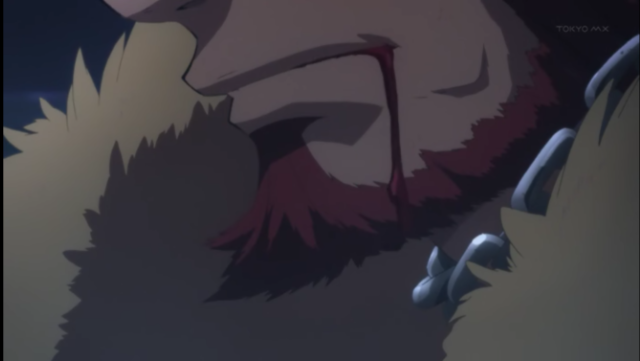 And then there were three.

This week was lots of moe-moe-ness from Waver, a badass final stand from Rider, and the revelation that Beserker has really, really pointy teeth. Oh, yeah, and he’s Lancelot of the Lake, although I think a lot of us had been spoiled on that one already.

We’re down one this week, as outside duties kept Lily from chiming in this time around, but she promises to have a lot to say next week. Without further ado, here’s Katherine on this week’s episode:

This episode knocked it out of the park.

At this point, I would probably fangirl like a thirteen year-old at a concert over Saber doing anything – wood-whittling (in a suit), eating Skittles (in a suit), buying socks (in a suit). But her squee-worthiness went through the roof again during her confrontation with Berserker. Her jumping off Cuirassier before it exploded was cool, but her finest moment was when she pushed that truck that was knocked on its side forward as a shield.

I’ve known Berserker’s real identity for a while, and I figured that Saber would have the reaction that she had. The question for me has been how things would resolve between them. I’m really looking forward to seeing what happens between them next week. It was also nice to see a flashback to Saber’s reign as King Arthur in this series. And when will Saber find out that Irisviel died? We shall see.

As cool as Saber was, Rider was the badass of the week for his Valhalla-worthy death. He will probably be the only character in this series to die satisfied. At this point, Waver is the only person who I feel confident won’t die, turn evil, go insane, or die a broken man five years after the war. I assume he’ll be flying back to England and resuming his magic studies now? As Day and Lily said last week, he doesn’t need the Grail anymore, and I’m glad for that. When he confronted Archer, a small part of me feared that Archer would kill Waver just to be an asshole and crush Rider’s last wish, but, quite wonderfully, he respected Waver for his loyalty. What was that about how honor doesn’t make war any more palatable, Kiritsugu? I also thought it was ironic that Archer taunted Rider about having delusional ideals during their final battle, considering what Rider thinks of Saber.

Only two more episodes. This show is killing me.

Moving into my own portion, I was also fairly pleased with this episode; I had been spoiled vis-a-vis Beserker’s identity months ago due to my complete inability to ignore the siren song of Wikipedia, so I’ve been looking forward to the moment when Saber figured out who he truly was. I have to confess, though, that her self-doubt and flashing back to what Rider said to her in the first half of the show has me pretty leery. I guess this means that the final dissolution of Camelot was different in the Fateverse than in our world’s Arthurian legend? After all, if it weren’t, I would have expected Saber to have picked, oh, I dunno, the fact that she was married to the woman Lancelot was madly in love with as the reason for his anger… especially since, following Arthur’s death, when Lancelot approached Guinevere she told him to go the fuck away and became a nun.

I think ultimately my take away from the interaction between Saber and Beserker is that, damn, I wish we could get an OVA just of Fateverse’s Camelot, because a female King Arthur makes things really interesting and brings up a lot of questions about how things played out differently. I also am curious as to whether Saber’s actual gender was well-known, or if it was something that the knights were aware of, and, presumably, castle staff, but no one else. This would make sense given that everyone acts all surprised when Arthur turns out to be Arturia, so at least that bit of Arthurian legend is the same in Fateverse as in ourverse.

Ahem. Anyway, Fate/Zero Episode Twenty Three. So, I’m a complete fucking creep and loved the hell out of Waver being mega-moe and uguu, even as he also demonstrated his possession of a pretty strong backbone in his exchange with Archer. I was a touch nervous when Archer walked up to Waver, but I didn’t think it likely Archer would kill him – Waver’s gotten so much development and has grown so much as a character that it would’ve surprised me if he’d been bumped off.

It was intriguing to learn that one of Archer’s Noble Phantasms is named after Gilgamesh’s closest friend, Enkidu… also the likely identity of Archer’s only friend. Conclusion: for all his desire to have Saber, Archer basically slashes himself.

Speaking of slashing, meanwhile Kirei walks around in the dark reciting Psalms 23, to remind us all that he’s a priest. Also, likely in order to indicate that he believes God to be on his side and that he has God’s protection. Cool story, bro.

We get a shot of Irisviel lying on a table on a stage, looking fairly peaceful for someone whose neck was cracked when she was strangled by an asshole. My guess is that she’s still chilling out inside the Grail, as we saw her last week.

In closing, there was some pretty fucking amazing animation this week during the fights. Fate/Zero is generally a fairly eye-popping series, but sometimes it manages to outdo even itself. We’ll just be kind and overlook that time that Kariya caught on fire. Everyone has a bad day once in a while.