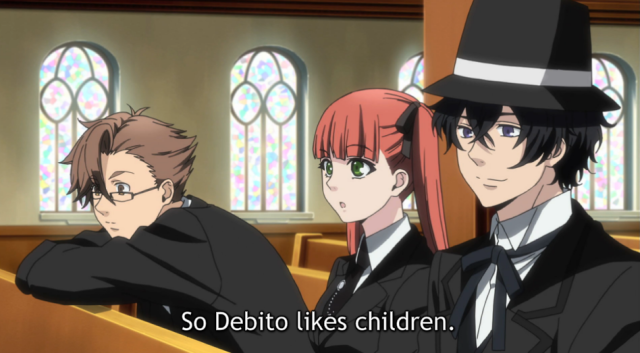 So in this episode we learn that one of our creeper members of the would be harem is actually a pedophile.

No, not really, but I couldn’t quite resist the urge to utilize that screencap. Here’s the one I would’ve used to start the post off if I wasn’t an asshat: 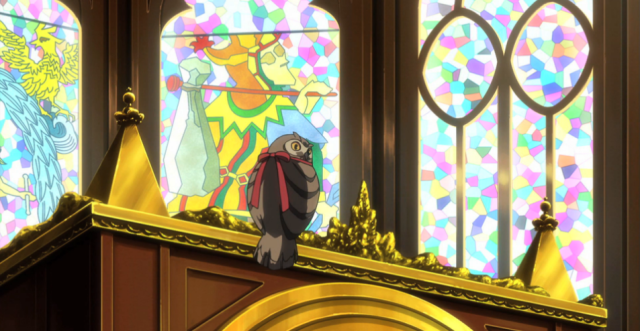 Now, where was I?

Ah, Arcana Famiglia episode three. We seemingly have yet another fluff-type episode here, as it is centered around this day called ‘Picollino’ in which the Arcana Famiglia entertain the local children. I was smirking my way through the explanation, because its another instance of our central mafia group’s nature being primped and made to look pretty. This isn’t to say that it isn’t pretty, because in-universe its apparently the nicest gang in the whole world and everyone loves it and it does no wrong, but that is itself what is so hilarious, as that depiction itself just beautifies the entire idea of organized gangs. Arcana Famiglia may be a good thing, but they are based off of something that is not, and as an audience its made very clear that these folks are based off of the mafia (since we’ve got the pseudo-Italian setting) or the yakuza (because its anime, duh).

With the lack of tension in this episode, and the ignorance of what was allegedly going to be our main storyline (the Duello), I think its safe to say that Arcana Famigilia is going to be one of those shows wherein we get confirmation about halfway through that there’ll be a second season. Sure, its possible that the pacing is just that awful, not that a second season is pending, but I feel pretty safe in my prediction – see: Hiiro no Kakera. (By the way, Prince-sama’s allegedly getting a second season.)

This episode is the first wherein we get to dodge any awkward, clunky explanations of people’s Arcana powers, which was a welcome change. We’re also given some reason to think that Debito (eye-patch guy) isn’t a complete creep, which is also a welcome change, although in this case only because his voice is kind of sexy. They utilize the age old method of making him care about children to drop his creep factor, which is lame, but its still preferable to hearing him refer to Felicita as if she were an object.

I was going to remark upon Felicita next, but it reminded me of the weird sequence toward the beginning of the episode which felt more like it’d been yanked from a bishoujo-type harem show. Liberta accidentally grabs Felicita’s boobs, and then when she kicks him, he accidentally sees her panties, and almost gets stabbed when he comments on their color. It felt totally out of place, and I didn’t like it at all; felt like it was a reduction of Felicita’s character, as it was standard tsundere behavior, and I’d like to think that she’s been slightly better-developed than that thus far.

And, compared to other reverse harem leads, Felicita has been better-developed to date, granted in large part by avoiding the pitfalls most of her ilk have hit by now. Debito is mildly creepy to her, and Pace is the one who gets wholly bent out of shape, while she just rolls with it. She seems to “get” Debito, which makes sense given her presence within the group, and I’m happy for it, as its truly tiresome to watch female leads blush and get flustered constantly. Felicita has a decent head on her shoulders.

Speaking of harems, though, Arcana Famiglia still hasn’t demonstrated much in the way of romance, or hints of romantic interests, and that continues in this episode. I think, too, that it’ll end up developing as a love triangle, with Felicita, Liberta, and Nova, and not as a truly full-blown harem situation. Pace’s status as butt-monkey is further cemented here when he gets smashed by a ball that one of the others kicks, and there’s more about Luca being food-focused. Debito does make the aforementioned pass at Felicita, but it rolls off of her completely. Granted, she hasn’t displayed any interest in Liberta or Nova, either, but, OP and ED say triangle with them, and OPs and EDs are pretty much truth, always.

Although I would prefer to have had more interaction with Felicita, Liberta, and Nova, I did still enjoy the episode. We got a brief flash of Liberta’s past, and I can see it becoming very hilarious in the future (unintentionally so), so that’s something to look forward to. There’s also some stuff about Nova not really having a childhood, as he and Mama have a conversation (during which I was snickering and thinking “ship ship ship”) about it, and that seems like it’ll be similarly overwrought and entertaining. It was still a fluff-type episode, ultimately, but with those items tossed in there, we could make the claim that it was “worthwhile” in some objective sense, even if I don’t really care if it was or was not.

But you know what this show needs more of? Owls. Lots and lots of owls. If we do get a second season, it should probably just be thirteen episodes of owl scenes. Or maybe the entire cast can turn into owls. It’d be a best-seller; I’d buy 1300 copies, and then me and the Shiki owl’d watch it with all Shiki owl’s non-undead friends. Awesome.