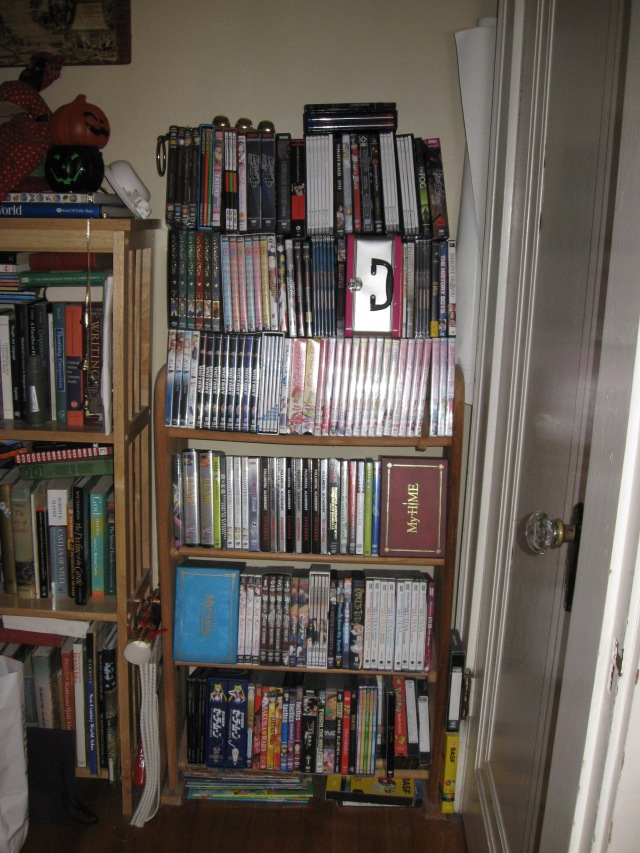 Whose DVDs do I buy the most? And hashing about favorite versus least-favorite companies.

For fun, every so often, I tabulate my anime DVDs by publisher. I like to do this because it shows me which publishers I tend to prefer in terms of licensed titles – basically, which companies license stuff that I actually like? I also find it interesting to see the shifts over time, particularly as we’ve seen companies come and go. I always mean to do a post about it, but I’ve never gotten around to it previously. This time, clearly, I have:

The numbers listed are the number of discs I have per company. I split ADV and Sentai because, lol, that’s what they want you to do. Well, no, not really – I was interested in the difference in my buying habits vis-a-vis ADV/Sentai after their massive brouhaha and facelift. If we combine them, then they outrank Geneon/Pioneer in number of discs.

What I find interesting here, though, is that despite having gone under six years ago, Geneon continues to be the number one in my collection. A large part of this probably stems from the fact that I have about twenty CardCaptor Sakura DVDs (not counting two VHS tapes). But, also, Geneon just happened to be the company that licensed shows I was the most interested in for a long time. I was totally devastated when they went under; I’m bummed that no Bandai means no Turn A Gundam DVDs, and I mourned Central Park Media because they were the company to take the first chance on Revolutionary Girl Utena, but the loss of Geneon was a real blow to me.

I also think its of interest that despite being the only colossus of the industry anymore, Funimation lags behind one partially defunct and two wholly defunct companies. I’ve got my eyes on the Aquarion EVOL license, and I welcome the chance to finally pick up the first two Tenchi Muyo OAVs on DVD (have them on tape, ha), but nothing else they have scheduled strikes my interest at all. A lot of the titles that they do carry and which I do own, too, are ones I got when ADV held the licenses.

Next, I decided to, for the first time, break it down by number of shows per company that I own either wholly or partially:

Originally, I accidentally typed “Revolutionary Girl Utena” instead of a number for CPM/Nozomi, because I own it from both (although I gave away my DVD set of the Student Council Arc to a friend to try to get her into the show). Nozomi’s number is going to shoot up in the next year, as I have plans to pick up Aoi Hana, and I’ll finally be getting MariMite for myself (bought a couple of the sets for a friend).

Even if those CardCaptor Sakura DVDs made up a big chunk of the total disc number for Geneon, it still ranks pretty highly on number of series, so it isn’t just a matter of CCS having a lot of discs. I genuinely liked a lot of the stuff that Geneon released.

While Geneon was my favorite company for a long time, Nozomi and Media Blasters are the ones that get my top love now, albeit for slightly different reasons. While Media Blasters doesn’t license much these days that I like (I think the most recent titles of theirs that I own are Simoun and Strawberry Panic, both licensed in 2007), I like them because they are, as a company, so approachable and so open to input from fans. They’re always the licensor at conventions where you can walk up, ask industry-related questions, voice your desire for certain series, and the folks there know what you’re talking about, are happy to answer questions, and often write down suggestions you have for licenses. There simply is no other company that is willing to interact with fans like that, in my experience.

Nozomi is a favorite because they’re willing to license more niche titles, and the niche titles so often align with my own interests. They’ve also got some of the highest quality releases on the market; to say that the Revolutionary Girl Utena boxes were amazing is to perhaps sell them short, and the decision to include two subtitle tracks for MariMite was unprecedented and something I really wish other companies would consider. Their retail wing, RightStuf, also has some of the best customer service in the online shopping industry. Many folks buy their anime from places like Amazon.com or BestBuy.com, but I would never dream of it, because I know I wouldn’t get nearly the quality of service as I do with RightStuf. I also like buying from RightStuf since I know that the money I spend there goes partially toward growing their licensing business.

If I were to pick a company I like the least, I’d nod toward Funi. I dislike being forced to purchase Blu-Ray discs when all I want are the DVDs. I’ve also had difficulty with them in the past over replacing faulty discs, and my experiences with them at cons has been poor. When I’ve asked questions at their panels and booths about the content on planned releases of shows I would like to own, I’ve gotten the attitude that I am asking stupid questions, despite the fact that none of the press copy had indicated answers to my questions about content. And I felt that their way of handling a young Sailor Moon fan’s dressing-down of the company and the North American industry at Anime Boston 2011 was pretty unprofessional and rude, as well.

I also am not crazy about Sentai, based on bad experiences at cons, where their panelists had no idea about what they were and weren’t releasing, and their booth workers denied me service because I tried to ask one of their panelists a clarification question at the booth. I’m fine with being told they won’t answer the question, but then being denied the opportunity to purchase a DVD set I wanted was ridiculous. Maybe its unfair of me to base my feelings about a company based on separate experiences at different booths over a couple of years, but I get the feeling I’m not the only one who has been turned off by this behavior. It doesn’t help that they seem to have folks in important positions who don’t know what’s going on in their own company. At least with Funi they know what they’re talking about.

Anyway, as I said before, I’m expecting my number of Nozomi discs and titles to jump over the next year. There will also surely be an increase in Funi discs and titles, and I know I’ll snag UN-GO from Sentai when it appears. However, for the near future, it seems that Geneon/Pioneer’ll continue to lead the collection… and the figure may even grow there, as I finally cave and pick up Sailor Moon S on used DVD, since it seems pretty obvious it’ll never get a re-license at this point.

EDIT: Whoops, forgot to mention: I also have two Anime Village VHS tapes (anyone remember this company? it was Bandai’s first stab at the American marketplace) and three tapes from Pioneer. Ah, memories.

SECOND EDIT: It occurs to me that I should probably mention that I’ve been collecting anime for twelve years.

2 Responses to By the Numbers: Day’s Anime DVD Collection