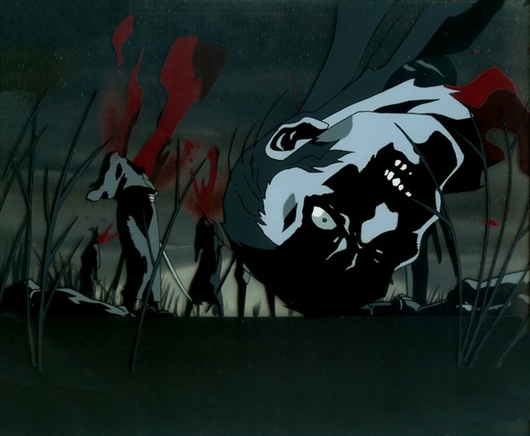 Seems like everyone loses their head at this time of the year.

Managed to finish off two shows this week, failed to watch two shows that have been airing (K and From the New World, whoops), and continued to struggle through another show. Don’t have too much to say, since with shows completed, one has already been reviewed, and I want to review the other. I will note that I’ve been making a concerted effort to cut back on the amount of shows I’m stalled on; I made executive decisions on a ton of shows and dropped them into the dropped pile, since, really now, am I ever going to go back to finish the likes of Amatsuki or even HanTsuki? Nothing against those shows – I just know it’ll never happen; I didn’t like either of them enough to make that sort of effort.

Secondarily, this also means that I’m trying to finish off shows I did put on hold, and to, once I’ve started a completely aired show, just follow it all the way through instead of watching a smattering of episodes, liking it, but then letting it drift out of mind. This also means I have to be more disciplined and not pick up six shows at once, since that inevitably leads to something falling by the wayside.

Anyway, all of this means that I a. finished Star Driver earlier this week, and b. am persisting with Vampire Princess Miyu TV for the time being even though I’m not terribly into it so far. But I’ll get into more on that below.

Finally, this means that I can tell you that the shows I’ll probably be watching next are:

I’m terribly looking forward to Peach Girl, which is basically crack, but forced myself to wrap up Tenshi ni Narumon and Star Driver first.

All that having been said, onwards and upwards, bros:

Wow, this thing went pretty sideways in the last couple of episodes… which was weird, since it had a few legitimately good episodes toward the end, too (ok, maybe only a couple). Building up Mikael to be the bad guy at the end didn’t really work, since there wasn’t much time spent on making him so, and it meant that his fate really didn’t make any sense (try to force two other folks to become angels, almost make a comet crash into earth, lose your damn mind = perfect angel material, apparently). Silky’s story was wrapped up too easily and too neatly, as it required a sudden turn-around in attitude right after she expressed her oppposition to fate by lighting herself on fire.

As I said in my review… well, I’m glad I watched it, but I don’t think I’d ever tell anyone else to bother with it. C’est la vie.

Very rare example of a show that actually did manage to get better in the course of its run, so much so that while I hated 90% of the first half, I really liked the second half. In fact, I liked the second half so much that I’m pretty excited for the movie, which is pretty shocking! Then again, I’m looking forward to watching the Madoka Magica movies, and I didn’t like that show… so, uh, maybe I’m just easily swayed by move theater screens.

Sigh. I’m trying really, really hard to watch this, but it isn’t working out very well for me. I’m frustrated, as I’ll watch a very good episode, but then get plunged back into mediocre to bad episodes. I keep watching since the ending sounds like something I’ll like… but, wow, this is a show that is definitely a candidate for having a lot of the fat cut off.

Argggghhhhhhh I wanted so badly to like this! It had “shitty, awesome anime” written all over it! Take Christians in 1600s Japan being persecuted, add a guy who is either Jesus Redux or the Anti-Christ, and top it off with more red ink than you could paint a beluga whale with, and this should’ve been a great ride. But it just falls short – it doesn’t go over the top enough to be entertaining, instead settling for scenes of carnage that just run together after about thirty seconds. Sure, this might end with an evil guy cutting off his finger and having it crawl up the vagina of his hypnotized daughter so that it’ll bewitch her into fucking the dying Jesus Redux (an orgasm that features the guy vomiting up blood as he expires? sweet!), but there’s a whole lot of nameless folks leaping around to an orchestral soundtrack while spinning swords to get through to get there.

There is exactly one thing that was cool here – the terra cotta tile dragon. Ninja Resurrection had a good budget, and it shows with this impressive beast. Unfortunately, the rest of the money was spent on people getting slaughtered, and after you’ve seen one guy’s ribs get ripped out, haven’t you seen it all already?