The Man I Picked Up BL Manga Review

Spoiler alert: what the fuck was that

I am once again reminded that I should never, ever, ever do blind buys when it comes to BL; it almost never ends well. As you can probably guess, this is the case with The Man I Picked Up, an anthology that starts loathsomely, improves a bit, gets incredibly weird, but never manages to be worth the price-tag or the experience.

The first story is about a man who has gone through a divorce, and his friend, a gay host club owner, who is trying to get him to cheer up a bit. The friend basically sets him up with one of the hosts, and, of course, we’ve got the usual idiocy of a Totes Straight Guy being turned “gay” (except, not really!) by the Cute Gay Guy. There’s even a mountain cabin involved. And the entire thing is easily one of the viler examples I’ve come across of this particular storyline in recent years, complete with “I’m not gay, its just you!” and sudden sex moment! (better known to some of us as, uh, rape). I could see where it was all going from the first few pages, forced myself to read a little bit more, and leafed through the rest. It was so bad I almost tossed the volume into the discard pile, but I just got it, so I figured I should give the rest of it a go.

The second story is actually fairly decent, although if you like things neatly done and strings tied up, it’ll likely leave you cold. A man who works at the host club thinks back on his first love… and, whoa! First love walks through the door! But pretends not to know him. But buys him for sex after his friend tries to make a move on the host club guy. There’s more after that, but I don’t want to give it all away; suffice to say it ends on a fairly ambiguous note, which makes it easily the best story in the anthology.

The third story is the title one, and it has its moments where its quite funny, but its never convincing enough. We just have a guy out of nowhere deciding he likes this other guy, after saying that he’s never been into guys before (although he’s willing to try so he can work at the host club, as the owner took care of him when he’d been beaten up). And if you want some sexy sex, well, uh, don’t look here.

The final storyline feels like the author gave up and decided to just go with parody, as it concerns Kaoru Hanazono, the captain of the cheer squad who is obsessed with “manliness”. Kaoru was teased as a child for his “girly” name, but then read a shounen manga called “title”, and resolved to be MANLY. He doesn’t think dating is manly, but a cute freshman named Takeo Arai (“live with a fierce rage”) challenges his convictions when he begins bringing him bento every day. Sex happens (duuuuh)! And then we get a follow-up about everyone thinking Kaoru is cute, and the two supporting guys ending up together. There’s also a Men in Black reference, weird visual metaphors for sex involving turtles and cherries, a joke about pubic hair, and a joke involving the Chinese mafia and Chinese restaurants. Its, well, bizarre… and fairly amusing, although the sex scenes in this one aren’t at all sexy either (two characters have sex in a bathroom stall, and the other two throw a roll of toilet paper at them, as they believe the stall is being haunted by Toilet Hanako due to the noise). I did like it, but primarily since I was saying to myself, “Ahahaha, what the fuck?” 85% of the time while reading.

At the end of the volume, the author’s note is basically about how the author had other stories she wanted to include, but her editor wouldn’t allow it since the stories were too dark. As the stories that actually work in here aren’t the “romantic” ones, I can’t help but wish these “dark” stories had been swapped in instead; I suspect I may’ve felt more satisfied with the entire volume had they been.

There’s absolutely nothing I can say about the release’s quality itself that I haven’t already noted elsewhere. Standard June release here, nothing special at all, although I grate against the fact that there are no cultural notes at all given some of the jokes that were made in-text. But I can’t say I’m surprised given how far that company has fallen in terms of quality of releases.

Anyway, I certainly don’t recommend getting The Man I Picked Up, especially so if you want some satisfying romance in your BL. Like I said, the final story is frequently funny, and the second story was good, but it isn’t enough to justify purchase given how bad the other parts are. Even with the June release stoppage from January through June, Sublime is putting out plenty to satisfy your need for physical releases of BL; no need to turn to this one.

But, here, before you go, have a turtle: 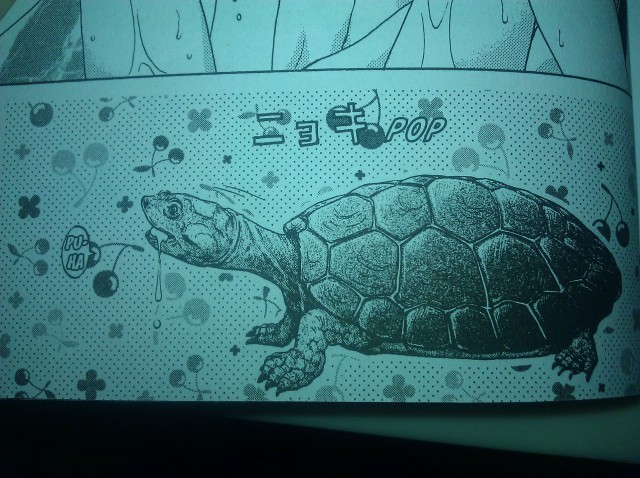