Twin Spica is Getting a Digital Re-release, and You Should Get It (Maybe Even If You Already Have It) 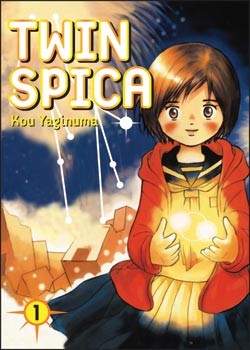 I should probably just assure you right off the bat that this has nothing to do with April Fools’ Day. As a wee child, I certainly loved that particular celebration, but I must confess to it having been years now since I’ve pulled any fast ones on this specific date. And, you know, I was actually pretty decent when it came to pranks when I was a kid – my favorite probably being the trick where you attach a dollar to a string, leave it sitting out in the open, then yank it away when some unsuspecting soul stoops to snatch it.

Anyway, having set that safely aside, the announcement that Vertical will be making available in digital Twin Spica actually surfaced a couple of weeks ago, but while I noted it with glee at the time, I didn’t fully absorb the news nor did I have a chance to disseminate it more widely. In the intervening time, the first two volumes have appeared for pre-order on both Barnes & Noble and Amazon.com (and are also, apparently, available through whatever mechanism it is Apple uses to sell books – the iStore?), each volume listed for a surprisingly low $3.47 (where I was expecting something in the $4.99-$6.99 range). I had already been considering picking the entire series up again in digital despite owning it in hard copy, and that price-point has pushed me fully into “yes, definitely!” territory. And those of you remaining hold-outs should see that price-tag and do the same.

I’ve read a lot of manga. I own a lot of manga. I have owned a lot of manga. I’m also fairly picky about my manga (although certainly much more so when it comes to BL than in general). Even given all that, Twin Spica is absolutely without a doubt one of my top favorites, my favorite manga available in English, and a manga I consider to be one of the best I’ve ever read… and, yes, I’ve also been consuming manga for a long enough time that I remember Iron Cat’s release of 3 x 3 Eyes and know what on earth “Mixx Comix” is (P.S. get off my lawn, chillens, when I was your age manga was FLIPPED and HONORIFICS WERE A MYTH and SAILOR JUPITER’S NAME WAS LITA) (but, hey, points to Iron Cat for rendering it “FUCK THE DELICIOUS CAKE!” and not something less striking and more censor-friendly).

First off, if you haven’t heard of it at all yet, Twin Spica is the story of Asumi Kamogawa, a young woman who has entered the elite Tokyo Space Academy with the dream of becoming an astronaut. Asumi comes from a humble background, her father a construction worker, her mother long-deceased, having been fatally injured in the Lion Disaster, an incident wherein Japan’s first space rocket malfunctioned and crashed into a seaside town, killing all aboard and many on the ground. A childhood friend of Asumi’s, Fuchuya, has also gained admission, as have several others whom Asumi will befriend in her first weeks of school. All want to be astronauts, but they know the chances are slim, and the class shrinks with each passing year… and even graduation is no guarantee of a way into the Japanese space program.

I’ll try to keep it short, since lord knows I’ve gushed a lot about the series over the past couple of years. I think one should give Twin Spica a try if they’ve been searching for a more substantial series, something with a bit more weight to it than much of what crowds the North American manga market (which isn’t to say that those lighter titles are bad, just that they’re unsatisfying if you want something *more*). One of the strengths of the series, too, is that it is what I would call a “growing series” – its enjoyable for younger readers (i.e. middle and high school), but there’s also quite a bit that doesn’t quite resonate until one is a little bit older. I suspect that if I re-read it again in a few years, I’ll only become more convinced of this fact – I’m not so far removed from high school myself, after all.

But, the real draw here is the cast; the story itself may be slightly fantastical (kids aiming to be astronauts at a super-elite school!) (and, looking at it, I’m dismayed at how clichéd it sounds, as well), but the characters who populate it are fully realized and wholly relatable… and quite likeable as well. Asumi is a heroine who it is easy to root, certainly in part since she’s a character and not a hastily sketched piece of audience bait (early on its easier to see the seinen roots of the manga, as editorial demands seem to dictate unnecessary locker-room scenes, something which thankfully slides away as the story wears on). She’s hard-working and she has to be, the deck stacked against her by circumstance and her own physical size from the get-go, and while she could easily have been pure archetype, her dynamism prevents that from ever happening. But while the story is absolutely hers, those around her are no less rendered, exceeding their apparent limitations of type as the narrative progresses. You know not all of them are going to make it to space, but one nevertheless comes to care about their stories and where they’ll end up, whether on a rocket or on the ground.

It also helps that the secondary current in Twin Spica concerns the adults whose dreams were dashed before the story even began, and follows them as they slowly but surely begin to get over the disaster which colors the background of the entire tale. Perhaps its best to say that, at heart, Twin Spica is about dreams – having them, fulfilling them, having them change, realizing that they aren’t possible, adjusting when that happens… Twin Spica isn’t totally different from other stories where people chase after difficult goals and only a few are destined to triumph, but its more honest about it – those who fail aren’t just faceless rivals forgotten within a few chapters, and one actually gets to watch what people do when their dreams prove too distant.

But you know what? Maybe you’re still unconvinced. Fine. But, really, $3.47 per volume? Is that really such a terrible financial gamble? That’s cheaper than JManga charged for a volume, and its got better staying power! If you’re still sitting there, hemming and hawing, but you want some good manga, you want something that isn’t Shounen Jump Title #487, or Shoujo Romance #368, well, come on! You’re willing to take the plunge on volumes at $9.99 and $10.99, why not just give it a go? It certainly couldn’t hurt.

JUST BUY IT ALREADY, DAMMIT, I KNOW I AM.

1 Response to Twin Spica is Getting a Digital Re-release, and You Should Get It (Maybe Even If You Already Have It)