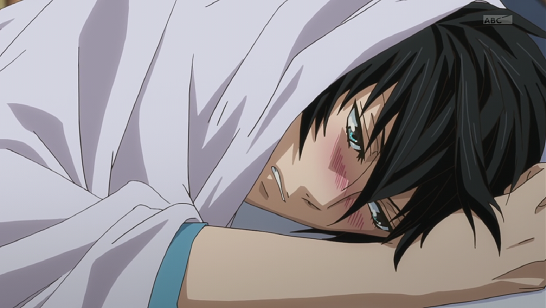 No, I can’t be bothered to get the ‘e’ with an accent mark… and, yes, that is a screencap from Karneval, that show I dropped however many months ago it was. SUPER MOE.

Beyond the Boundary, ep. 5

I already talked a good bit about what was so wretched about this episode, so there isn’t much more to say. For every solid moment, Beyond the Boundary comes up with six shitty ones to ruin any goodwill it manages to scrounge up. I can’t be bothered to keep tuning in for the scraps of good here anymore. Talk about disappointing after a pretty decent run out of KyoAni, but, hey, nothing lasts forever, huh?

I decided in the past few weeks that, well, I might as well finish Karneval even though I’d previously dropped it, which is a bit of an odd decision on my part as I’m generally a “dropped forever” sort. I guess I’ll blame it on the ED being on my mp3 player.

Y’know, episodes eight and nine weren’t so bad. There were some stupid moments, but on the balance, I actually enjoyed them. Episode ten was even fine for the first two-thirds or so before there was the good ol’ Forced Drama Event. But I realized that, ultimately, while I was able to enjoy these episodes, that was pretty much because I’d taken such a long break that the fact that there is no overarching plot, that there are no true connecting threads between one event and the next becomes easy to forget. And the main issue with Karneval has always been that there hasn’t been much forward motion across the series, and its a series where such an approach doesn’t work – you’ve got grand conspiracies apparently at hand, and all sorts of “who can you trust?”-type stuff that not developing the plot leaves one wondering what the hell the point of anything in the show is at all.

Anyway, with only three episodes left, I’ll be finishing it up. Tsukumo is still super-cute, and the moments with Nai faffing about cutely are quite enjoyable. They better have Nai crawl into bed with Gareki one of these days, though, ’cause, sheesh, they’ve missed two fantastic opportunities for that in these episodes, SIGH, and Nai being all cuddly and making Gareki blush would be lovely.

…but I actually have nothing to say of substance at the moment since I watched these two episodes last Sunday. Whoops.

I feel a little guilty for liking Flamenco Girl as much as I do, because kicking guys in the crotch is, um, not really a good way of dealing with bad male behavior. But I kind of love her. I like the gap between her public persona and her actual personality. I adore her devotion to magical girls. I also reallllllly enjoyed the way the show uses her to link magical girls with superheroes, since the modern magical girl (i.e. post-1991 or so) generally is a superhero but is often not recognized as such.

…I kind of want to cosplay as her, but not sure I would feel okay with committing to that much boobage. That sort of get-up might work with anime boobs, but I don’t have anime boobs, I have real boobs, and physics is probably going to say “lolnope” to that one.

We saw a teeny bit of a peep into Goto’s relationship with his girlfriend, and it was enough to show us that Goto and his girlfriend have a nice, mature relationship. Isn’t it delightful to not deal with teenagers?! Goto’s girlfriend teases him lightly about his canceling their date, like she’s an actual human being! Just think, if this were Golden Time, she’d have tracked him down and bashed him over the head with a bouquet of roses!

So, some silly melodrama in this episode, and apparently falling off a roof produces the same affect on someone as having a fever does. Nevertheless, I still really love this show, and the why of it definitely lies in the character dynamics, as well as the continued overall competency of our female cast. I shouldn’t get so excited every week over that latter bit as I have been since its become pretty clear that this is business as usual in this show, but as I’ve said before numerous times, its realllllllly exciting to have female characters who can take care of themselves and don’t need a guy to swoop in to save their asses every five minutes. And by having the female characters be capable, it makes the times when a guy does lend assistance just feel natural instead of like the situation was solely set up as it was so the guy could look cool and the ladies could look moe.

Going in a different direction, I suspect I am enjoying Galilei Donna as much as I am, too, for the same reason that Outlaw Star remains one of the my favorite anime (and is my most-watched anime, having watched it start to finish five times) – quest narratives involving cool ships are fun as hell. Really wish this one was longer than just eleven episodes.

This entry was posted in Uncategorized and tagged beyond the boundary, galilei donna, karneval, samurai flamenco. Bookmark the permalink.