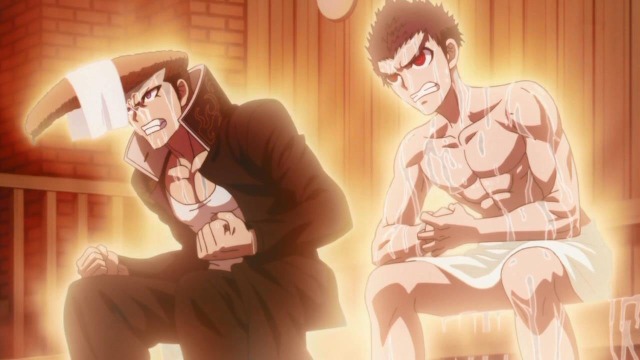 So not much in the way of current anime for me this week; I heard Galilei Donna’s episode was awful, so I haven’t gotten to it yet even though that’s my favorite currently airing show. I’ve also yet to catch up with Kyousogiga, which feels like a rather unfortunate oversight given how thoroughly I enjoyed the first two episodes… perhaps if I didn’t devote so much time to crappy shows I would have time for good ones!

This is a good example of “crappy show I watched and could’ve used time for Kyousogiga instead”. Its a bit sad how I ended up being persuaded to watch this – it more or less boiled down to people saying: “It’s suuuuper gay.” So, basically, Gundam Build Fighters, popularly dubbed Gundam Boyfriends, is Angelic Layer if Angelic Layer was about homoerotic twelve year old boys, one of whom is a prince and looks a lot like that guy from Star Driver… sooo, actually, this is pretty much Gundam with the spirit of CLAMP possessing the Sunrise staff. It is also a toy commercial, and in that regard it vaguely reminds me of G Gundam, which was what happened when Bandai bought Sunrise and said, “Hey, yo, Gunpla sales are flagging, do something about it!”

However, for the slight odor of G Gundam to the proceedings, I find Boyfriends falls short of that highwater mark. For one, the racial stereotyping/racism doesn’t quite match the brilliance of the likes of the Tequila Gundam, or that homicidal assassin Nepalese pilot (that was a stereotype, right?). And where G Gundam actually had a pretty decent female cast (Rain Mikamura is easily one of the best women of the Gundamverse), well, Boyfriends is fairly lackluster in that front.

Actually, the crappy female cast and the treatment of them turned me off a good deal. Episode four should’ve just been titled “Madonna versus Whore”. Idol girl Kirara is a Fake Geek Girl who shakes her bum and boobs, gets her fans to build her Gunpla, but who has done all the legwork on learning about Gundam the franchise herself. China is the meek, modest girl-next-door type who becomes interested in Gunpla ’cause the guy she has a crush on is into it but who shows no aspirations of any sort, be it to win at Gunpla fights or whatever. (Kirara also definitely comes off as a “have one’s cake and eat it, too” figure – we’re clearly supposed to look down on her for her use of Gunpla to advance her idol career, but the camera angles invite us to enjoy her body.) I’m sure future episodes will have Kirara resurface having found a true passion for Gunpla, but it’ll nevertheless be connected to the fact that a boy told her he knew she actually liked it for the sake of itself. Is it even worth bothering to go over the fact that the male adversaries have all been presented as fully legitimate, or to mention that Kirara loses her match versus the hero even though she cheated to try to win? And, no, I’m not really inclined to be charitable given Sunrise’s generally poor track record with female characters.

Speaking of unnecessary focus on the bodies of female characters, was a bit dismayed with how much time was spent lingering on Mari’s butt and boobs this week. Although Mari’s Flamenco Girl outfit defies physics, I honestly didn’t have much issue with that, and I still don’t (although, yeah, uh, no, breasts don’t really work like that). However, the shots of Mari in her underwear and the scene where she’s topless didn’t warrant inclusion, and I was uncomfortable with how the shot was framed while she was in the recording studio – long shots of her torso and butt and crotch swaying to the music without showing her face.

…of course, I know someone is going to claim that Flamenco Girl’s stomping of male crotches somehow cancels this approach to depicting her. It really doesn’t, quite frankly, although I am uncomfortable with the amount of violence rendered upon male bodies by Flamenco Girl.

Anyway, I did like the episode, even with my criticisms. Masayoshi getting ultra-excited over being in the sentai show and then being so disappointed in what it actually turned out to be like was a bit cute. I liked how the disappointments felt by Masayoshi, Goto, and Mari were mirrored with each other across the course of the episode, something which helped demonstrate the fact that they’ve ultimately got the same root disappointment at hand – feeling like what they’ve decided to do isn’t all its cracked up to be and like they aren’t really doing enough for what they feel is justice. It’ll be interesting to see what comes of Goto’s proposed plan going forward.

Also – so are we supposed to think Moe has a thing for Mari? She was standing there clearly expecting a kiss, her lips pursed slightly and eyes shut, and she did seem a touch disappointed when one didn’t materialize. Hmm.

Weeeelllllll, not quite episode three, as I didn’t make it through the whole thing. I sort of wonder why I even bothered trying – it isn’t as if this is a show folks are claiming has turned out brilliant despite flagging in the second episode, after all. In fact, most of the news has been terrible regarding it. Considering that this is coming from the folks who made K, I feel pretty hideously disappointed; K was ridiculous and over-the-top and goofy, but I think what differentiates it from Coppelion is that the behaviors by the characters at least felt somewhat organic, as did the events, even as they got increasingly loony. Put another way, when drama happens in Coppelion, it seems to require one-eighties from the characters, whereas the characters in K more or less behaved in manners consistent to their established characters (even if the established character was fairly shallow). Coppelion just sort of tacks sharply from left to right such that one gets a sensation of whiplash.

If I try to pick this up again, please smack me, someone.

Speaking of drama and things happening organically… goodness, Karneval does manage to waste some moments that could genuinely be dramatic while running full speed ahead with the really forced-feeling moments. That being said, Karneval’s stretch here is pretty solid, and its too bad that the rest of the show couldn’t’ve been more like this; relatedly, its also too bad it sold so damn badly since the momentum it gets here screams for a sequel (Karneval never crested the three-digit mark on any single volume for DVD or BD release). Mind you, it still is far from perfect and there’s a good deal of stupid to the whole thing, but it finally finds a direction worth pursuing and gives us some more intriguing matters to chew on than the first seven or nine episodes did. Wish the manga would get a North American license – overall seems to have done better down in Australia/New Zealand, where the manga is being released and where the anime is getting a DVD release from Madman.

So, finally got around to this one. I actually kept confusing Gatchaman Crowds and Danganronpa prior to the start of the summer season and in the initial weeks. Once I actually picked up Gatchaman Crowds it did become much easier to not confuse the two! They are a touch different. While Gatchaman Crowds had some neat ideas early on, I suspect I may end up liking this one as a whole better, especially as I found the ultra-optimistic ending to Crowds irritatingly unrealistic (well, to be honest, Crowds sort of runs counter to a lot of my own gut beliefs about humanity at large).

I like the creative parts of the animation, but I’ll admit I haven’t gotten to look at them too much since I flip to another window when the execution sequences reach the point where whatever awful thing will happen to the current killer happens. I’ve always found the likes of Saw and its many off-spring distasteful; not scary, just gross.

Its hard for me to really say much about Danganronpa that travels in a linear fashion as I speak because I’m still a little unsure of what to make of it. For a show about a bunch of teenagers becoming murderers and the awful ways in which they die, there are a lot of fairly amusing moments. I do enjoy the mystery solving aspect. At the same time I’m uneasy about the treatment of a character who cross-dresses, specifically the reasoning behind the why, and the pacing seems to go a bit askew as the show progresses. Only one of the murders and its aftermath has much impact, although that works in the show’s favor, although maybe not in the manner the show would want it to given how much time is spent focusing on how despairing the whole thing should be (it isn’t; I don’t care about most of the characters, and my sentiment toward the deaths at most is “oh, gee, too bad, I kinda liked their character”).

On the balance, I like it and enjoy it. Its certainly one of the better survival game anime/manga out there at the moment, and I seem to have developed a taste for that (dare I blame The Hunger Games? actually, it’s probably the fault of Lord of the Flies…).

Oh, and Ishimaru totally had the hots for Ohwada. Pixiv kind of needs to get on that more.