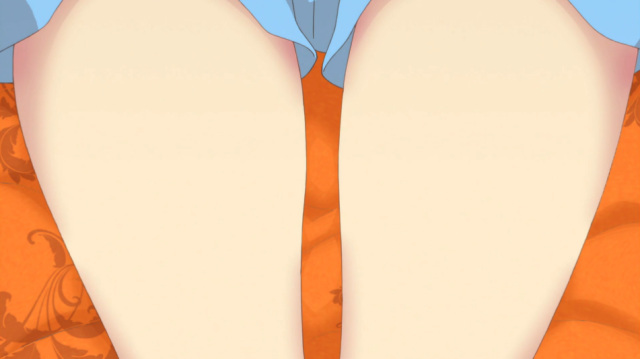 I will not indicate which birdling gave me some hope that Sakura Trick would be anything worthwhile, but suffice to say, the show was not. Boobs somehow bouncing about as if unencumbered by brassiere while also remaining perky in a fashion impossible sans bra (unless these sixteen year olds have had silicone injections) and obsessive camera focus on high school thighs doesn’t really do much for me. Actually, no, that’s a lie – it does do something for me: it makes me feel disgusting and in need of a good shower and some, oh, say, rubbing alcohol. For my brain.

Sakura Trick’s OP reminded me pretty heavily of Strawberry Panic, which struck me as a bit odd since the manga isn’t like that show at all, but the show itself would be improved were it like Strawberry Panic. Strawberry Panic was a gleeful send-up of a lot of yuri tropes with a heap of cheese piled on top, and I loved it. Sakura Trick is a dull series of vignettes that involves a lot of girls kissing each other but without much in the way of an organic development of what we are meant to view as a budding relationship. For all that Haruka monologues about Yuu, it all feels very artificial – Yuu tells Haruka they can make their friendship special because she can tell Haruka is upset about changes, and then suggests they kiss because this is yuri, so of course she does. Yuu doesn’t seem to think much of it so that Haruka can fret over it because this is high school “romance” and it needs to have a complication to it. Ho hum. Going back to Strawberry Panic, we get that Nagisa has the hots for Shizuma because the show shows this to be the case, but here we more or less have to have Haruka directly tell us she likes Yuu. Sigh.

I’ve seen the girls in this show described as lesbians. Are they? I’m inclined to say no, quite frankly; I don’t doubt that Haruka has squishy feelings for Yuu, and maybe Yuu has some back (well, by decree of the show, at least, she will, regardless of whether the show actually develops it toward that point instead of just plopping it down in front of us while declaring, “there!”), but I feel no reason to state that these girls are homosexual or even bisexual. Maybe Aoi Hana and others of its type have simply raised the bar; its hard to view cutesy, sixteen-going-on-ten characters as gay when we’re spending much of the runtime staring at their breasts and thighs (as if they were a chicken dinner!) and no one pauses for any consideration of what their same-sex attraction means in the larger picture. I’ll take ten Fumis over a Haruka any day, thanks (or, hell, even five Yayas).

I’m sure I’ll have some folks who take issue with my approach to these girls. After all, do characters need to tell us they’re gay? Do characters have to take into account that being gay in modern Japanese society isn’t 100% peachy? Isn’t it nice to, from time to time, have a fantasy of a world just like our own except that being gay isn’t of any note whatsoever?

Except… we do live in a world where homosexuality tends to be stigmatized. So much of yuri and BL is of the “lesbians until graduation” or “only gay for you!” variety that actually, yes, I do think it has to be clearly named. As a teenager, I myself sought out a lot of books about gay teenagers because I found it comforting to read about people who were gay in a partly-hostile to mostly-hostile environment, because I lived in a partly-hostile environment and it hurt me a good bit and caused me a lot of anguish. So, yeah, I do want characters to be willing to step up and say, “I’m gay.”, and who do, if they live in a world that’s indistinguishable from my own, have to contend with society and its expectations and demands. (This is probably why I got into salarymen BL – the characters were much more likely to identify as gay and to have to tangle with stuff like parents trying to pressure them into omiai or co-workers badgering them about their love lives.)

Mind you, this isn’t why I find Sakura Trick bad. Strawberry Panic’s anime doesn’t have any characters who identify as gay, but I find Strawberry Panic highly enjoyable (and, oh my fuck, I know its silly, but it did make me wish I’d gone to a private girls’ high school…. ^^; ). Ditto Nobara no Mori no Otome-tachi, which I really wish would get an anime. BL and yuri don’t have to have LGBT-identifying characters to be good, necessarily, although I certainly feel it goes a long way to increasing my likelihood of enjoyment. Sakura Trick is bad because its dull and because the relationship we’ve got so far is just sort of tossed together by writ of the writer’s room. Sakura Trick doesn’t, to me, feature any lesbians because I see no evidence of it despite the swapping of spit betwixt girls. Girls can swap spit pretty easily without being gay; believe me, I certainly witnessed it enough.

Anyway, as it stands, Sakura Trick is a boring show about archetypes who I cannot muster any concern about whatsoever and plagued with a camera that just loves underage breasts and thighs. Here’s hoping either Akuma no Riddle or Inugami-san to Nekoyama-san can at least solve the uninteresting piece of the yuri show equation in the spring even if they don’t include lesbians.