HOWAITO FANG… and then Gundam Wing Became a Butts Show 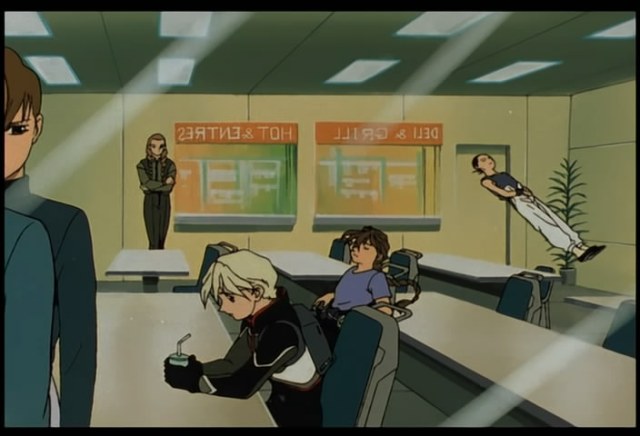 And here it is, the last of my Gundam Wing posts…

that are commentary on the set of episodes I’ve most recently watched. I still have that shipping post to do, folks, AND I’ll be watching Endless Waltz this coming weekend! So don’t get too excited over me potentially moving along, or maybe get excited because there are at least three other posts waiting to happen for this series!

Also, fair warning, this post is pretty much a mess, even by my standards.

In this final chunk of episodes, stuff goes a bit cattywumpus as Zechs more or less begins to behave in a manner that really makes no sense versus his characterization in the first three-quarters of the show. Sure, you can see some sense in his arguments in favor of having a huge space battle to persuade people that war sucks if you do a SHAFT head-tilt and squint a bit, but it still has no consistency with his established character. It’s also massively idiotic and demonstrably wrong-headed by even a brief perusal of the history of humanity – may as well point to World War I given that we’re hitting up the hundredth anniversary of its start today: the War to End All Wars, anyone? It’s been so cool how we haven’t had a single conflict since, huh?

I’ve seen a couple of folks comment that the ending to Gundam Wing is terrible, although I’d argue that considering all the silly crap that crops up after episode forty that it handles it pretty decently. Sure, Zechs didn’t make much sense, and, sure, this in turn meant some of the actions of characters around him didn’t make much sense, but once I accepted that Zechs had gone all Invasion of the Body Snatchers on us I was more or less able to roll with it, nodding my head sagely, “Yes, yes, of course Treize has re-appeared and of course Lady Une woke from a coma, immediately escaped from the hospital, commandeered the original Gundam Wing, flew it into space, and thus saved his ass.” Also, I was horridly amused whenever anyone said “White Fang” since it tended to be rather emphatically rendered as “HOWAITO FANGU”.

Actually, more generally the final arc of this show gets increasingly hilarious as we bounce toward the final conclusion (which is Relena tearing up a letter from Heero, and thus is a great bookend for the series, honestly). The incredibly impassioned and dramatic final confrontation between Treize and Wufei comes out of nowhere if you’re not expecting it (Wufei being hung up on not defeating Treize early in the show during a sword duel is something I can completely buy, but Treize being similarly hung up is rather weird), and seems pretty strange as a decision on the production staff’s part since the entire build-up of the final space battle positions it as Zechs versus Treize, both on a personal and political level (i.e. Treize loves oligarchies and Zechs loves smashing the face of the planet). (Going back to the fact that Zechs whole idea about making people not want war by having really horrible things happen because of armed conflict – After War Gundam X certainly indicates that dropping things on the surface of Earth for destructive purposes doesn’t really do much to make everyone’s lives better.) 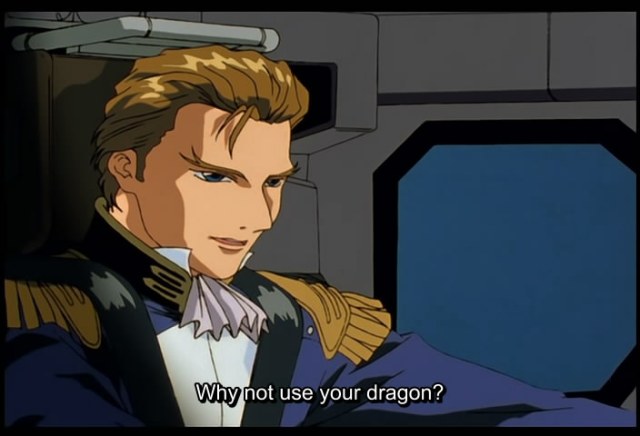 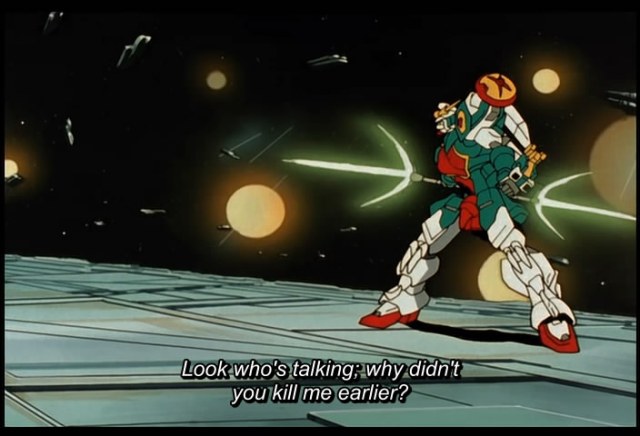 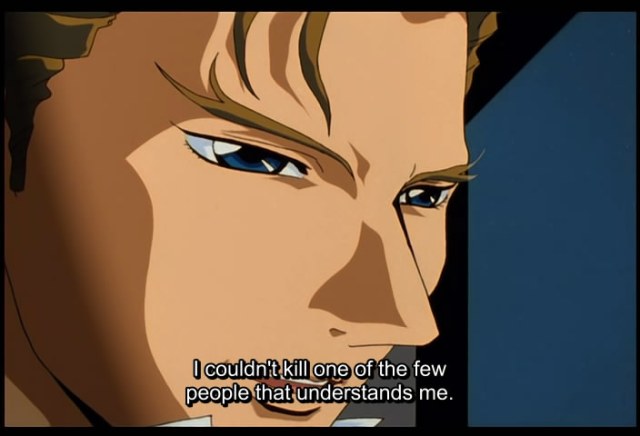 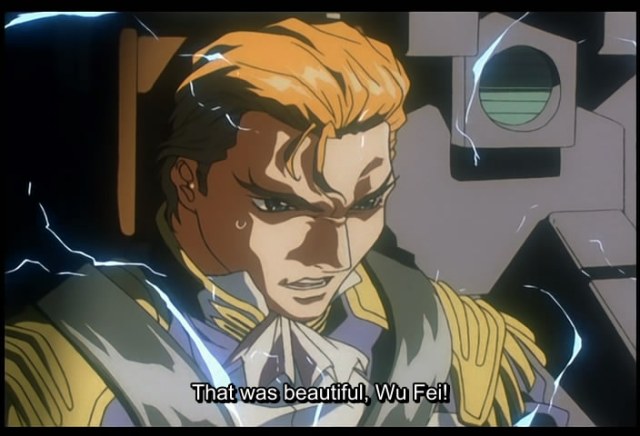 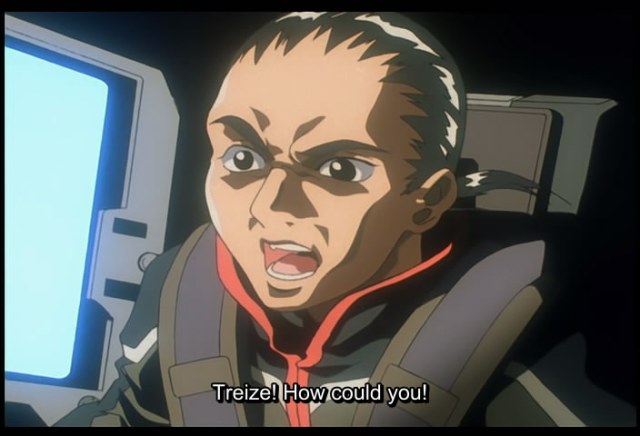 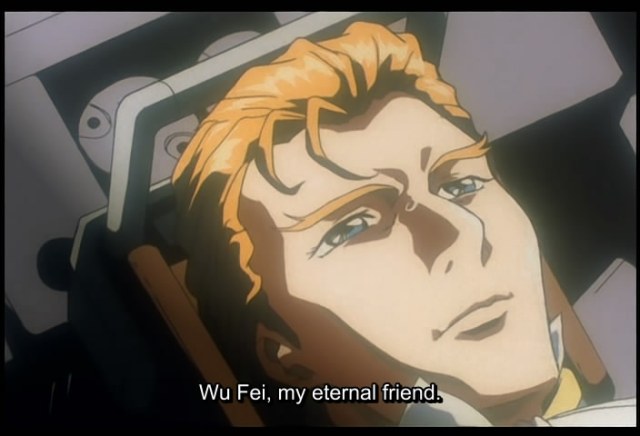 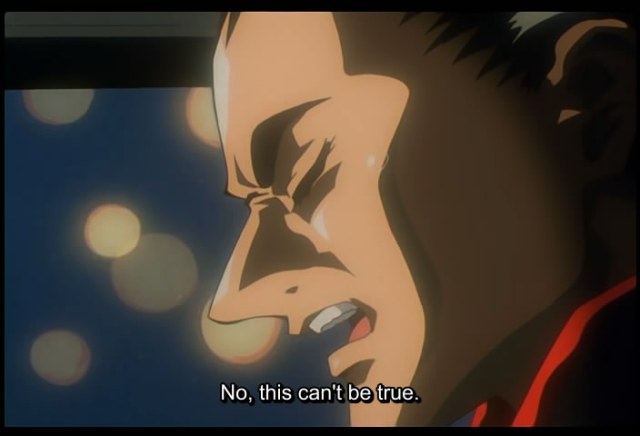 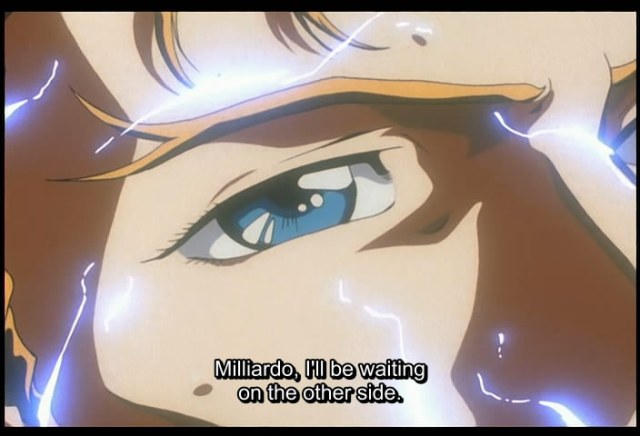 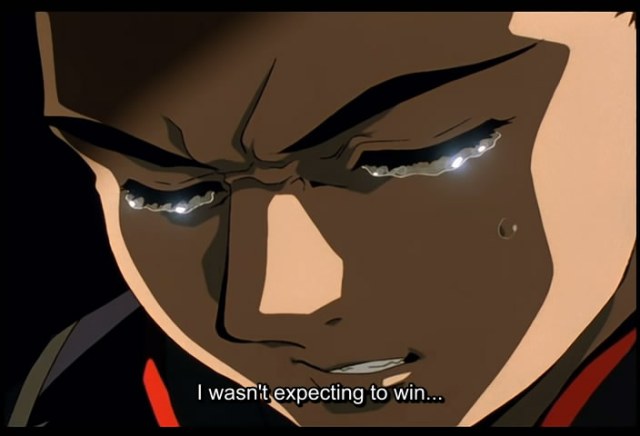 Wow, Treize, hitting on a fifteen year old in the middle of a space battle – creepy much? And I thought Gamlin in Macross 7 was bad! At least he was only five years older than Mylene and not something like eighteen (although, really, Mylene and Wufei are roughly on the same page maturity-wise). And not only that, he sort of NTRs it all in the middle by mentioning Zechs (I swear this line made sense in my brain). I more or less laughed through this entire scene. It is clearly intended to be very dramatic but it’s just goofy as all hell even considering that Treize croaks here. For a character who was such a big part of the entanglements of the plot he gets a pretty underwhelming exit, and, as I said, before it would’ve been more sensical if Zechs had dispatched him.

Oh, and did I mention that Gundam Wing suddenly becomes a butts show in this final run of episodes? And it becomes a butts show with the introduction of Quinze, a guy who looks like Benjamin Franklin and is one of the oldest members of the cast. Just look at that shapely ass! 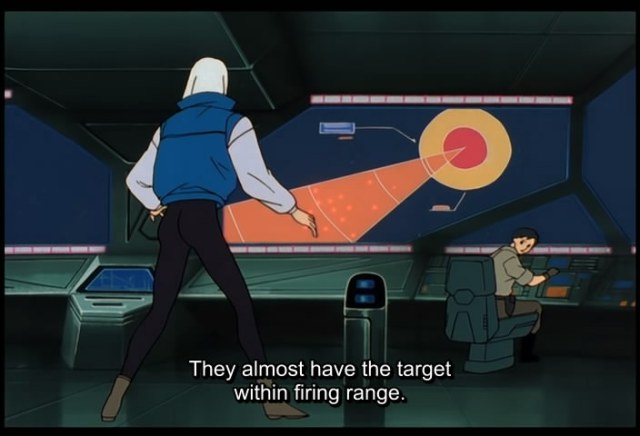 Quinze has the shapeliest butt in Gundam Wing and we see a lot of it. I haven’t seen Gundam butts this shapely since the Mobile Trace System in G Gundam! Quinze’s butt easily rivals Domon’s. I can only conclude that the only reason Quinze is introduced at all is since Sunrise decided the audience could really use some old guy butt, and maybe so Dorothy could look cool and together when Quinze curls up into a ball and starts shrieking when their battleship is hit by another one and Dorothy just easily handles it. There seems little other reason for him to appear in the story so late in the game in a prominent role like he does.

Have I talked previously at all about how much I hate the Heavyarms? Because I really hate the Heavyarms. Its crappiness stands out especially here since the other Gundams are fairly cool – the Deathscythe has an actual scythe! The Sandrock dual-wields shotels*! The Wing has an amoral piloting system! The Shenlong has a grappling arm that’s like a dragon! And the Heavyarms is mad for gatling guns and always runs out of ammo because of halfway through fights, leaving it to depend on a fairly measly laser sword-thing. Who the hell mounts gatling guns on a mech, anyway? It’s a massive design flaw, especially with a pilot as trigger happy as Trowa seems to be given the tendency to run out of ammo with so many enemies still to go. I also hate how it looks; I don’t precisely know why its color scheme irritates me, but it does. I could point out that its color scheme blends with nothing, but that’s true of all the Gundams with the possible exception of the Sandrock (the dark-coloring of the Deathscythe is good for space or nighttime operations but the white components ruin any advantage there). It also reminds me of a couple Digimon, something that nags at me ceaselessly whenever I see it.

Somehow by the end of the show, though, the Heavyarms has become magically capable of having endless ammo on the gatling guns. ~Magic~. ~M~A~G~I~C~. Nothing else explains it, Trowa is firing just as much as he always was during the show. Maybe it’s the power of love, if we wish to go the shippers route, as Trowa goes out of his way to retrieve Quatre after the latter gets stabbed. 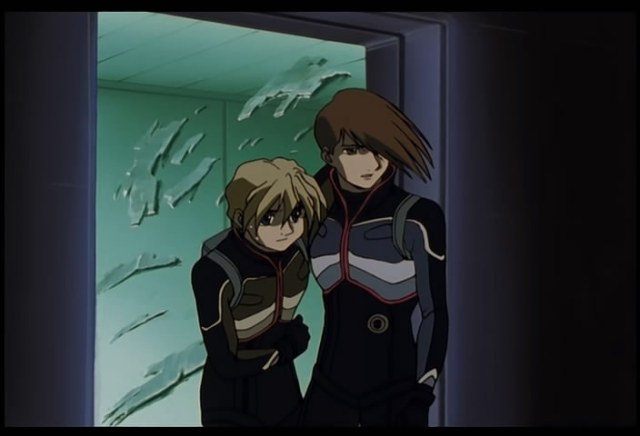 There’s a good bit of hay for 3×4 shippers here, speaking of. Thumbs up! What’s funny about this is how I had more or less assumed that I was exaggerating how much support there was for the pairing. Celeste, one of my fellow journeyers of Gundam Wing, remarked to me that she’d been surprised at how little evidence there is for 1×2; I’m not so much surprised at that as surprised at how little time Duo and Heero spend together at all. They’re almost never alone together, and the time that they do spend together is primarily focused in the first half of the show – I don’t think they have a single moment together in the final ten episodes at all. I suppose one could make something of Duo’s seeming ignorance about Relena’s importance to Heero (he’s so star-struck that he’s blinded to the fact that Heero’s hot for Relena, perhaps?), but that’s a pretty strained stretch.

So now all I’ve got left is Endless Waltz. And the manga spin-offs. Haha, yeah right, like I’d ever touch Frozen Teardrop! Even I have some standards.

I’d meant to sort of wrap up my feelings on the series, but this hasn’t been exactly as I’d intended. I suppose at this point my general sentiments are more or less already set – I think that it takes a truly, truly atrocious ending to a show to alter my feelings about an entire show (and I suppose emphasis on “think” since in wracking my brain for an example I come up empty; the Karin manga had the worst ending I’ve ever read but I still liked the rest of the manga). It would’ve taken something truly extreme to alter my love for the show overall – I doubt even killing off the entire cast wouldn’t’ve managed to change that. Maybe if Zechs and Relena had gone the incest route? But, no, I would’ve scoffed over it, but it wouldn’t cast a pall on the whole thing.

I maintain that Wufei was fairly superfluous to the plot. As mentioned before, he gets hauled out to have a fight with Treize that’s intended to be rather dramatic but just strikes me as baffling. I’ll admit that I only bring up Wufei, though, to have a jumping off point for the fact that I’m not really a fan of Hilde. I don’t dislike her, exactly, but I don’t really like her either. Like with Wufei, she’s just not a necessary piece in the show; I also think her original actions don’t make a huge amount of sense. Hilde is presented as being fairly dedicated to OZ and being a soldier within it because she’s dedicated to the colonies and strongly believes that being a part of OZ will give her the chance to work toward the future of the colonies. But a few lines from Duo are apparently all it takes to knock her off kilter, as she suddenly leaps to his assistance when he makes an escape and attacks the Lunar Base. I would be willing to accept that Duo had instilled a little doubt in her, and that over the course of months she started drifting further from her original ideas, but for her to throw in her lot with a Gundam and so disavow her previous ideology utterly in the course of roughly twenty-four hours? Even for a fifteen year old that’s a bit farfetched. Hilde’s entire purpose really just is to make it more believable when Duo does escape from OZ and for there to be someone to give the Gundam crew intel about the Libra battleship… and to give Duo a female counterpart like the others have (although, let’s face it, Dorothy being Quatre’s is even more half-assed, and that the two guess that they’re facing each other by proxy during one of the space battles makes no sense whatsoever… and you know what? Sally Po as Wufei’s counterpart doesn’t make much sense, either – the difference with both of these, though, is that Dorothy and Sally are fully integrated into the story whereas Hilde isn’t). 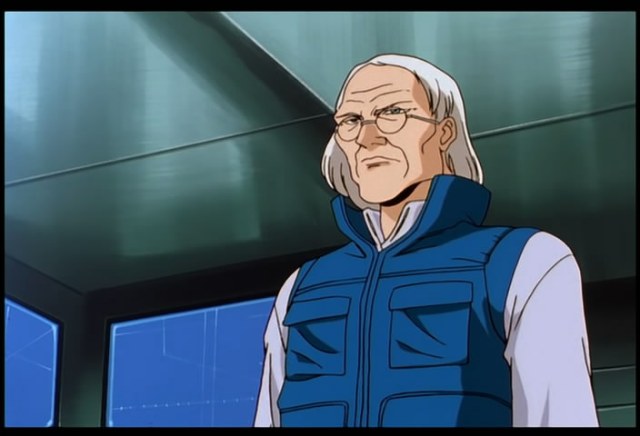 * I’m sure these were meant to be scimitars, but the curve of the blades is just too dramatic to be classed as such.