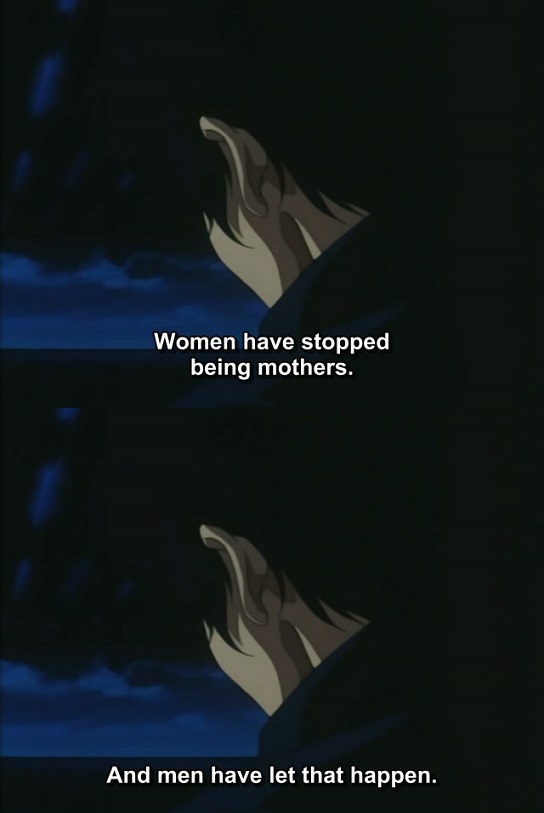 Oh dear, Brain Powerd. This was a pretty terrible show; its the sort of thing that is so thoroughly bad that someone couldn’t’ve set out to make it this bad and have achieved just that. Its sexist, its racist, its implicitly homophobic, a good deal of it doesn’t make sense not for attempts at creating mystery but simply because it wasn’t well directed, the characters frequently behave in ways that are unrecognizable as human behavior, much of the cast of protagonists (the people of the ship Novis Noah) is unintentionally depicted such that they come across as unsympathetic assholes, the few likable members of the cast get less and less screentime as the shows moves along, the show forgets one of its themes for about twelve episodes before resurrecting it abruptly anew… the list is likely endless; the only thing I can say was wholly good was the OP music, which I quite liked, even as I snickered at the sheer volume of nipples in the accompanying animation.

However, badness alone isn’t enough to propel me through twenty-six episodes, honestly, not if it isn’t badness featuring, say, poorly-drawn and super-angsty florist/assassins (but that was only twenty-five episodes!). There is a serious lack of super-angsty florist/assassins in Brain Powerd. What there isn’t a lack of is demographic angst, and, wow, Brain Powerd really is the anime of demographic angst.

Around the time this aired, Tomino stated in a few interviews that he wasn’t ripping off Evangelion here. Maybe it made sense to insist upon this at the time, but in retrospect it feels weird since the show doesn’t bring Evangelion to mind at all. Sure, both have some pretensions to depth (and although I’ve never gelled with Evangelion, I will grant that it isn’t just pretension in its case), and Brain Powerd at least starts off with showing us how shitty the parents are of a few of the teenaged members of the cast (before forgetting that adults are total shit for the aforementioned twelve episodes or so), which is like Evangelion,  and, yeah, there are giant robots being piloted by teenagers, but that’s honestly about it. Evangelion wants to pick at metaphysics and psychology; Brain Powerd wants to roll around on the floor moaning about how no one wants to be a parent anymore and how awful Americans are.

I really kept watching Brain Powerd because of how completely the thing is a reaction to declining birthrates in Japan. The Brains themselves are regularly referred to as children by their pilots, and they are mechs that are born, not built. They also behave childishly and are shown as maturing as the series progresses, with younger Brains needing soothing from their pilots when in frightening situations and older ones being capable of making their own decisions. Basically, the only way to be an effective pilot is to be a good parent to the mechs. Much hay is made of the current generation of parents in the show being incompetent as parents, either through emotional or actual abandonment, and some characters explicitly comment on how unreliable that generation is when it comes to fulfilling their roles as full adults, i.e. parents. Conversations like the snippet above are fairly common and just as lacking in subtlety.

The good guys eventually endeavor to take in thousands of orphaned and abandoned children with their second captain, Irene, at the center of the plan, having replaced the previous Captain Anoa, whom we learn had emotionally abandoned her son by opting to work outside the home. All mothers with jobs outside the home in this show are depicted as being selfish and uncaring, and their offspring are twisted by their experience in a home with a working mother. Even as Hime, heroine of the series, continually acts immaturely and nastily, she is set up as the center of the show and as the person who is most capable of communicating with the mechs and with the ominous organic ship Orphan, and its no accident that she spends the show acting as a mother to a trio of children. Generally, girls become reformed in this show by dispensing with their abrasive personalities and becoming kinder to and more interested in children.

By the close of the show, almost the entire adolescent cast is paired off in heterosexual couples, which isn’t exactly surprising considering that they’re on a ship named after Noah, he of the whole one male and one female of every animal put onto the ark. We also learn toward the end of the show that Orphan isn’t a lone organic ship but has a masculine counterpart – the mechs of the show are born of plates that Orphan releases called B Plates and which we are shown otherwise hang out in Orphan’s womb.

There’s an edge of nationalism to this concern about the children as well. We meet up with a bunch of very racially-charged depictions of Chinese people who have been thieves for generations and who merrily offer up a few of the friendly characters to the U.S. Army in hopes that they’ll get money and free passage to America out of it – and who also live in very tightly jammed quarters with a hell of a lot of children. On the other hand, problems arise when the U.S. Army backs Orphan because they’ve got many, many more mechs than do the folks of the Novis Noah.

In 1998, the year that Brain Powerd aired, the birthrate for Japan was 1.38 children per woman, well below the replacement rate of 2.1. The birthrate per 1,000 was 9.6 versus 7.1 per 1,000 for the deathrate. America in 2012 had a birthrate of 1.88, but had an immigration rate that was high enough that it had a 0.75% increase in total population, which was one of the highest in industrialized nations. There are people within Japan who argue that a looser immigration policy would help to avert a population collapse. Clearly the production crew for Brain Powerd are not in that camp.

Brain Powerd really is a show that howls the fears of a post-post-World War II Japan, of a declining population created by a selfish generation that can’t be bothered to parent properly, of women who seek fulfillment outside the role of homemaker and thus ensure a stunted and warped generation of children to follow. In Brain Powerd, the bad moms get their just desserts, while the children become whole again through parenting of childlike mechs and pairing off heterosexually, preparing them for their proper roles as parents to human children. Its fascinating to watch it shape up so clearly even if I’ll always tell people to never watch it themselves.