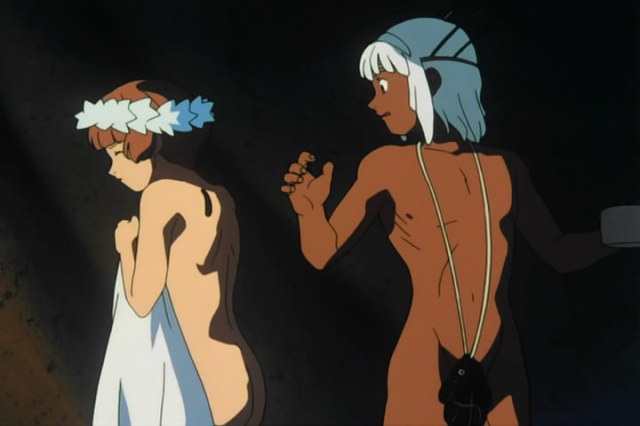 Sorry, I’m a week behind with this – been doing a ton of overtime and keep not managing to actually turn on my computer at home to post the stuff I manage to write during my breaks at work. Uguu sadface.

Man, this show seems to grow assholes like a tree grows leaves. At least Tsukishima gets taken down a peg, surely moving him along the way to rehabilitation from the unfortunate case of assholeism that he suffers from, although at the same time I must say that I weary of the conversion of jerks to friendly forces that is so common to anime in general. So much of the time it requires that we forget seriously nasty transgressions without really furnishing much reason to other than the show thinking it’s time to bring the character into the fold. I don’t mind characters redeeming themselves, but they have to actually redeem themselves, y’know? At least we get the conflicted reaction from Hinata, who hates Tsukishima, but also hates the new jerk in town.

I wonder at what point we end up facing the high school volleyball version of Stalin, as each newly minted asshole here possesses a crappier attitude than the one before. It’s an arm’s race of assholes! I suppose we’re ripe for a wretchedly nice boy who ends up being an ultra-rival who is hard to deal with because he’s just so damn nice. On the other hand, the newest guy to surface looks like he’ll hail from the “extremely abrasive team-mate” aisle. (Also of the abrasive cut of cloth – the incoming coach, who is pretty obviously going to be the guy who works at the store where the boys stop for buns every day. He reminds me very vaguely of the teacher in Kimi ni Todoke who told the kids to go straight home and have a good shit.)

None of this is to say I’m not enjoying the show, I just question this need for a metric ton of assholes and worry that it’ll all just get stupid if every single new one has to one-up the previous. If they really want to stick to jerks, maybe they could have them be jerks in different ways? Like maybe one guy is a good player but instead of jeering at his opponents he sneaks into the locker room and steals their warm-up pants and pees on their shoes. Anime loves people peeing, right?

In unrelated news, I ship pretty much everything in this show, although I don’t approve of pairing Tsukishima with anyone except his sycophantic friend. I mean, really, dicks shouldn’t get dicks, y’know?

Oh, fuck yes, censored vomit! Vomit is *so* racy~ Thank goodness at least the subtitles read “barf barf barf” so we knew what was going on there. But my question is – will the DVD/BD release uncensor that? If not, I really don’t know that I can purchase this show. Censorship sucks!

So we’ve got a brand-new, shiny loli added to the mix, and she’s now getting imported to the damn dorm even though she’s a middle schooler. Oh, and Souta tells her that they can be brother and sister because he was trying to destroy a death flag. I suppose what’s good in this show is that the actions that must be undertaken to defeat the flags is just as arbitrary as the outcomes of actions in visual novels. I recently played one of the Hakuouki games, and when I opted to go to the gate where people were fighting instead of to another spot, the guy I was trying to get with ended up turning into a demon. So, hey, if going to a gate instead of somewhere else is enough to turn the pretty tuberculosis guy into a demon, then, sure, telling a loli that you’ll be her real older brother will mean she doesn’t die.

Hey, going back to the puking, gee, it’s kind of nice to have the guy be the one who can’t deal with the water in these beach episodes rather than it be one of the haremettes, huh?

And going back again to the chunder… when I was a kid, I had a written list of all the words for throw up/throwing up. It started after my dad said that our beach umbrella looked like psychedelic vomit from the water. My mum helped me think of a lot of them. I wonder whatever happened to that list…

It’s been a while since I last watched Turn A, one of my favorite Gundam series. I was really quite thrilled when Bandai Entertainment snapped up the license for it several years back; I had saved the fansubs on DVD-R’s, and when I heard the news I immediately junked them and started eagerly checking DVD listings for a release date. Of course, this never happened, something I’m still annoyed about. At their panel in 2013 at Anime Boston, Sunrise did indicate that there’s a chance that Turn A could get licensed, and also that it is something their company gets asked about at cons in America still. Since then, Funimation, Sentai, and Nozomi/Right Stuf have both announced licenses for several Sunrise properties that had previously been released by Bandai Entertainment, but nothing that hasn’t been released before, to include Turn A (in fact, most of the Gundam franchise is currently unlicensed in North America). I’m not terribly optimistic about the likelihood that Turn A ever will see a legal release in North America.

Re-watching these episodes, I realized that I had forgotten how much I enjoyed Turn A. I’d also forgotten how thoroughly atypical of the franchise Turn A is. Our lead is a young man, like many Gundam protagonists before and after him, but he isn’t cocky and brash, and he is much likelier to pick up an opposing mobile suit to prevent it from hurting civilians than he is to shoot at it. Then there’s the fact that it isn’t until the sixteenth minute of the second episode that any mechs show up at all, and that the enemy mechs don’t look like something out of a Gundam show – they’re awkward-looking things with long legs and boxy bodies. Turn A is also the closest Gundam gets to having aliens, as the Moonrace, people who’ve not been in contact with the Earth for a couple of millennia, descend upon Earth, having tired of their lunar home.

I’ve had some curious timing, as regards that last matter, as I’m currently reading Howard Zinn’s A People’s History of the United States, a good chunk of which discusses the expansion of the United States across the North American continent. Time and time again the native populations were told that they needed to move to make way for Europeans and European-Americans, with the Euro/mericans expressing befuddlement as to why the native peoples wouldn’t want to move, and taking care to, at least rhetorically, pretend that they weren’t asking much of them at all in asking them to vacate their land. There were also repeated promises that if they just moved to land further west and let Euro/mericans have the land they were currently on, then the Euro/mericans wouldn’t ever ask them for anything else (obviously this wasn’t true). Watching these episodes as the Moonrace moves in and makes their demands, I kept thinking of this – they even demand land for their people with the promise that if they’re just given some of the best land there is to offer that they’ll leave the people of Earth alone.

I suppose they had to at some point do an episode featuring a bomb requiring a combination to halt. It occurred to me while watching this that there actually is fairly little fanservice in this show – yeah, we’ve got a tit-tastic girl in a low-cut top as one of the other assassins and we’ve seen Haru in her underwear a few times, but the camera is, on the whole, not terribly male-gaze-y. We don’t have lingering shots of breasts or lengthy changing scenes, nor do we endlessly stare at panties or thighs. Even in the swimsuit episode we’ve got here things are pretty tame.

One thing that stuck out, though, was Haru’s willingness to get into a two-piece swimsuit. We’ve previously seen her not wanting to bathe with others because of the scarring on her arms and legs, so it seemed odd to now have her wholly at ease with her scars showing.

Oh, and, yes, we finallllly got a kiss, albeit of the rescue breathing variety. I was feeling a bit impatient over how light the yuri’s been so far, although at same time it feels like this was the right time to make it a touch more text than subtext, as we’ve got Tokaku blushing mildly about it afterward.

This entry was posted in Uncategorized and tagged akuma no riddle, haikyuu!!, if her flag breaks, kanoflag, kanojo ga flag wo oraretara, turn a gundam. Bookmark the permalink.
Loading Comments...
%d bloggers like this: