DRAMAtical Murder at a Glance 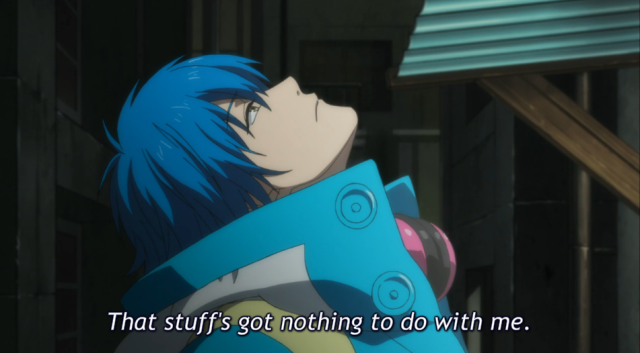 There were a lot of reasons for me to not even bother at all with this one (from the makers of Togainu no Chi! the likelihood that the BL material will be excised entirely!), but, hey, fujoshis gotta fujoshi, right? And better than getting involved with the horrid character designs of Love Stage! So there I was, watching the latest cast of characters to commit dire sins against fashion and retinas.

Admittedly, my bar was set pretty low going in, but I find it pretty amusing that this show did a better job of the whole “virtual reality game that can harm/kill you in real life!” thing than SAO II did. Where SAO II sat down and painstakingly spelled it all out for the audience about what was going on, DMMD just opted to show us the lead getting his ass kicked in virtual space and let that speak for itself. Mind you, that isn’t to say DMMD is any good, but it did keep the exposition fairly minimal (and it also kept the jargon quotient fairly low).

That being said, DMMD is firmly planted at mediocre. The animation is utter garbage, the characters are dull, and the music is grating visual novel BGM. I’m not repelled by it, but neither am I enthralled by anything that happens here. If it weren’t for the fact that I’m an uncool fujoshi, I would let the show slide into distant memory at this point. However, I am an uncool fujoshi, so guess what I’m doing same time next week? Yep, that’s right – I’m tuning in.

I’ve seen some debate about whether or not this will actually contain any BL after all. Togainu no Chi really didn’t have any outside of some suggestive poses and a few leers, in an apparent attempt to market the show to an audience wider than just fujoshi. Of course, this just meant the original fans were ticked while non-BL fans didn’t even bother at all with it since it’d already been marked as BL, so the thing sold like utter crap (yeah, yeah, the show was pretty shit, too, but there’s not a hell of a lot of BL anime out there to compete with, so leave in the BL and it would’ve likely sold respectably). Given that, you’d think maybe they wouldn’t repeat the mistake here, but who knows? It’s a different studio this time, too, so it’s anyone’s guess.

2 Responses to DRAMAtical Murder at a Glance