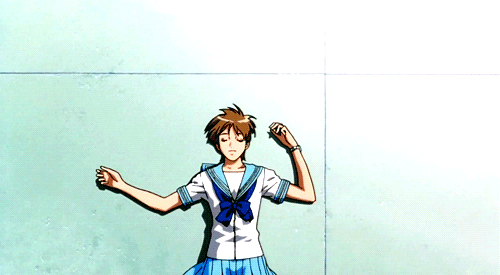 I’ve been toying with bringing back this sort of weekly post for a while now, and it seems like now is as good a time as any. I’m going through a lot of life changes at the moment (I moved across an ocean a few weeks ago, I’m getting married in a few more weeks, I’m doing shift work for the first time in my life, and I am still running around trying to find a permanent place to live and a car to drive… hell, I’d settle for a bicycle at this point, to be honest), so my post output it likely going to remain on the low side, but at least this way you can read my precious, insightful words once a week.

For general orientation purposes, I’m watching more or less weekly the shows I go over below that are currently running. I am very far behind on Sailor Moon Crystal, which is unlikely to change anytime soon, and theoretically I’m still watch Akatsuki no Yona, although I’m fairly behind on that as well.

Episode five is bonkers. This show had been fairly standard magic thief fare to this point, and then suddenly we get ACTUAL magic, complete with voodoo dolls and mind-control chocolate. It wasn’t exactly a good episode, although I enjoyed how loopy some of it was. There’s a running joke in the episode about Kaito not getting why he people are giving him chocolate on February 14th since he’s never been in school on that date before that is genuinely funny, which is an accomplishment since most of this show’s humor has been of the 80’s shounen variety and thus, well, not particularly amusing.

Episode six is… there. Eh, just not much to say about it – it isn’t bad, but it feels pretty sedate after the silliness of the previous episode. I could do with Kaito being more decent to Aoko, which has been an issue from the start, although mercifully its been a while since we’ve had any “sexual harassment is hilarious!” moments. At least we’ve getting some characters finally who are more on Kaito’s level, as watching him outfox the goofy and foolish police was getting pretty boring. Mildly malicious sorceress Akako and Shinichi (better-known elsewhere as the pint-sized Conan Edogawa) have their own flaws as characters, but they’re a welcome addition to the show.

Man, what is up with the Servants not really falling in line with their types? Given that F/SN was the first iteration of this universe, I really do find the classes of Servants baffling – how is this Rider of that class? Until Assassin was introduced, I assumed Rider was Assassin. And the whole thing with Archer using knives and swords is so freaking silly. I may not be an Urobuchi fan but at least his Servants made sense with their classes (and it isn’t even his property to begin with!).

Shinji’s a shitbag, but that’s nothing new. Did we really need him going full rape culture on us, though? Isn’t it enough that we know he probably physically abuses his sister, has an anger problem, and is full of himself?

I might be starting to hit the point where this just isn’t the show for me, honestly. I’ve always kept away from Deen’s F/SN since I find the central arc of it wholly not to my tastes (let’s transform Saber from skilled swordwoman to the milquetoast lead’s girlfriend!!), and with Shiro uguu’ing out when Saber was watching him use magic the show is hitting its stride on that loathsome part. And while I may have hated the final third or so of Fate/Zero, at least the characters were adults there; having teenagers be the participants takes a lot of the weight out of the Holy Grail War.

In Search of the Lost Future, ep. 7

I realize I’m one of very few people at this point watching this show still, and I’m one of even fewer who is actually enjoying it in a manner where my pleasure isn’t derived from what I find terrible about it (I’ve got Aldnoah.Zero for that). Waremete isn’t a good show by any stretch – that we are on episode seven and haven’t had the plot strain forward more than a few inches since episode two is all the evidence we really need for that. However, I’m a bit of a sucker for shows like these wherein some member or members of the cast are trying desperately to prevent a bad future from happening. In this case, I even don’t mind at all watching the cast go through mundane motions and activities as it emphasizes Yui’s extremely unenviable position in it all – BUT I really wish we were getting more background info in the mix. At this point I’m beginning to suspect that there isn’t going to be enough time left for the climax and denouement, quite frankly.

As for this particular episode itself… goodness, rather quaint for Sou to have a dirty magazine under his bed, isn’t it? And the content itself was pretty tame. I was the age of the cast about ten years ago, and I can safely tell you that the only time I ever ran across anyone buying or owning a dirty magazine was when a (male) friend of mine lost a bet with myself and one other person and got to be the lucky ducky who had to buy this really trashy porno magazine. We then argued about who had to keep it because, ugh, come on, why on earth would you want something that a person could find by accident?! But maybe Sou has a bad internet service plan.

No prizes, by the way, for guessing that the man in Yui’s flashback (forward???) is adult and depressed Sou.

I’m a bit surprised at how thoroughly obnoxious Tarou is. In a way, I’m even impressed at it, as he’s irritating in a fully-realized way. Anime is packed with intentionally annoying characters, but its Tarou’s clear lack of awareness that truly sells it, from the fact that he simply assumes that his distaste for women who drink would be of any concern to Miyamori, to his inability to understand why passing along word-for-word messages from one crewmember to another is often a recipe for disaster. I can’t stand him but I also love the characterization. One does wonder if someone like him in real life would simply be canned, though, mid-season.

Talk about least surprising dramatic hookup ever, even if it was largely out of nowhere. When you see a man and a woman paired as either commander and senior NCO, or as commander and XO, and they’re roughly the same age and are demonstrated to get along, there’s about a 95% chance they’ll either turn out to be involved or will become involved across the course of the show, or, at the very least, it’ll turn out that one has the hots for the other. And Argevollen is nothing if not pretty bog-standard when it comes to mech shows.

Moving onward, this was a pretty boring episode, implications of sex or no. It was a weird episode in that we had a lot of extraneous fluff (mostly extraneous fluff) paired with big plot items. I cry foul on the evvvvul general’s characterization, as we went from him being so totally evvvvvuuulll to suddenly whipping out a seriously flawed but completely understandable and not totally horrible reason for his backroom dealing. Some might say this makes him a complex character, but it just feels like Xebec chucked it in on a whim at the last second given how much time we’ve spent watching him evilly feed his fish and evilly meet with evil corporate representatives.

Also, damn, Argevollen, if you’re going to be sexist, just stick with that and stop trying to wave your arms and show that you’re not. The mechanics all talking about finding it sexist when the head mechanic tells them that mechs should be handled like women before then saying THIS must be why he’s been able to marry multiple times (i.e. he’s attentive in bed) is foolish at best and its much more irritating than if he just waltzed through and said it to them without attempts for justification. The head mechanic, when he does show, remarks that he doesn’t see why the poor academic performance of a son of his by his second wife is of any concern to him because, ugh, they’re not even married anymore, why is it his problem? What an asshole.

Escaflowne: A Girl in Gaea

I might write up a larger review, but in case I don’t, I do want to make some comments. First of all, this movie is visually gorgeous, and when you hear people gushing about hand-drawn animation and promoting it over computer-drawn animation, this is what they mean. Secondly, wow, did that feel really of it’s era, or what? I swear all the anime movie adaptations of the 90’s (although this was originally released in 2000) believed that the only real way to do a movie of a TV show was to add much, much, much more gore. I couldn’t believe how many severed limbs were flying about in this!

I am in the minority in that I liked this more than the TV series. I like Hitomi’s characterization a lot more here, as she comes off as being much more otherworldly where TV!Hitomi felt spacey and dazed. And even if she barely matters to the storyline, Millerna as a badass swordswoman is WAY more to my liking than her ever-pining version in the TV series. While the movie does have some of the same flaws as the TV series did, the shorter format is kinder to these flaws – being unable to imagine what Hitomi or Merle does when they aren’t directly on-screen isn’t so much of an issue when you only spend a ninety-five-minute movie with them instead of a twenty-six episode TV series. That being said, the shifts in Hitomi’s characterization make the end of the movie infuriating, and Van and Hitomi’s relationship more or less morphs out of nowhere. Not a franchise that’ll ever make my top list, and I’ve already donated the DVD to a charity shop. Glad I watched it but once was enough.

(By the way, in my mind Yukari and Hitomi’s split here was pretty obviously a spat between girlfriends.)