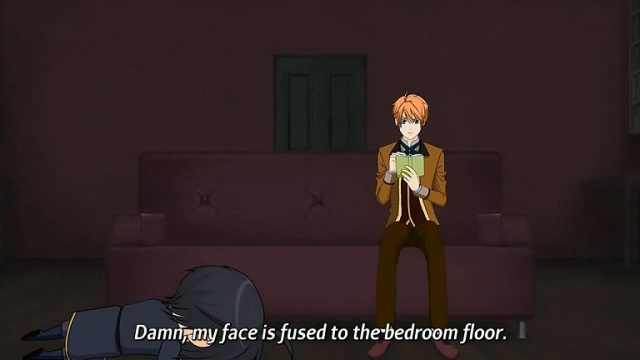 Fun fact!: The Vampire Holmes OP/ED was sung by the same person who sang the second Argevollen ED!

Vampire Holmes has wrapped up, and I must admit that I’m genuinely somewhat disappointed to see it go. Despite serving as the sort of thing that makes people think, “This is awful, *I* could do better than this! In fact, I CAN make anime!”, after three months of following this, it’s hard not to feel toward it as one might feel toward the really stupid, really ugly puppy in a litter who just can’t stop running headlong into walls. It’s so stupid! It’s so ugly! But, aww, look, it’s trying so hard! Aw, come here, puppy. This is what they mean by moe, right? Vampire Holmes is moe.

In case you have no familiarity with Vampire Holmes, it is about a “detective” named Holmes who seems to mostly spend his time lolling around and not paying his rent. Periodically, he lies all over his sofa in a manner which suggests that this is supposed to come off as sexy inactivity… well, sort of. The ending implies that it should be taken as akin to Gilgamesh/Archer’s sexy “inactivity” in Fate/Zero, although where that show made it clear that the man in question was scheming his pert ass off the entire time, here it’s tacked on at the last moment and may just be misdirection. Anyway, Holmes has a protégé in Hudson, a young man who theoretically works for him but couldn’t possibly be getting any salary from it. Rounding out the regular cast is the landlady, who is quite unlike the landlady from Sherlock Holmes in that she is beefy and regularly storms in to grunt at Holmes or kick his ass for not paying his rent. The show follows their non-adventurous lives as the animation and art around them slides toward desolation from what was never a particularly high starting point.

I highly recommend Vampire Holmes, although, SPOILERS, there are no vampires in the show. Don’t get your hopes up about bite marks and long canine teeth in the OP, nor about the person being crucified and lit on fire in it, because, yep, that isn’t what this show is about.

But, yes, I highly recommend Vampire Holmes. It is a terrible, terrible show, and it is perhaps the worst anime series I ever have watched, in the sense of it taken as a whole (Victory Gundam is worse as an experience, but it features nifty things like animation, and backgrounds that don’t look like they were filched from an abandoned North Korea propaganda cartoon circa 1975). Vampire Holmes is poorly-written, poorly/not animated, features bad art, and after the halfway point introduces a blatant ad for the mobile game as the start of every single episode, cutting into already scant time for its nonexistent story. The only thing that I can truly say isn’t bad about it is some of the voice acting, as Hudson is perfectly fine and the demon cat has a voice that is perfectly obnoxious and as such suits the character well (although I suspect there may’ve been some autotuning involved).

So why watch it? Why, because it’s one of the worst anime out there! Each episode also has roughly three to four minutes of content once the OP and ED, and the commercial, are chopped out. AND! You can watch it for free on Viewster in at least four languages (English, Italian, German, Spanish)! If it were merely a matter of, “You should watch this, it’s awful.” without an easy way to do so, I probably wouldn’t push it so hard, but, come on, its just waiting there for you to stream it… you might as well. It’s also one of only four shows I have finished/expect to finish (Blood Blockade Battlefront, wtf) from this season, and if that isn’t a ringing endorsement, I have no idea what is!

This entry was posted in Uncategorized and tagged vampire holmes. Bookmark the permalink.