Exploitation, a Two-Way Street, or, Mulling ‘If My Favorite Pop Idol Made it to Budoukan, I Would Die’ 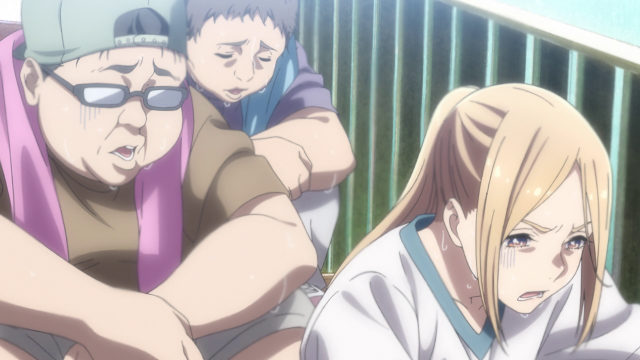 Do you count as a fan if you’re not even willing to spend a dime?

So, folks, the new season of anime is in full swing; with the exception of 2020’s iteration of Pretty Cure (Healin’ Good Precure), we are at least two episodes deep in the latest offerings. For the most part, things are proving surprisingly decent for what I’ve given a go, although given how little airing anime I watched in 2019, my own standards for surprise have dipped fairly low. But the one I want to talk about is actually the one about which I’ve got the largest reservations about and which I would hesitate to say I like at all, even if there are some aspects which I’ve enjoyed thus far (the backgrounds are lovely, enough so that I’m shocked I hadn’t seen any mention of them prior to having watched it myself; they are courtesy of Studio Naya, and I need to read the credits more closely because I could swear someone who worked on Go! Princess Precure must work there) – If My Favorite Pop Idol Made It to Budoukan, I Would Die.

As the title indicates, this is a show centered around an idol fan, Eripiyo, rather than primarily around idols themselves, although the idols do get some attention when out of the public eye, particularly Maina, whom Eripiyo adores. It does feel a little surprising that it’s taken this long to wrap around into giving the fans and fandom themselves some of the spotlight considering how many darn idol shows there have been in the current idol anime wave. (By the way, the OshiBudo manga started – a very slow! – serialization in 2015; it’s up to six collected volumes now.) Some of this may be related to the extreme angst within the harder core sectors of idol fandom regarding idols developing any sorts of more personal relationships with males specifically, which necessarily limits what sorts of interactions are permitted between idols and their heavily male audiences… and which OshiBudo itself neatly sidesteps to a degree by focusing on the romantic relationship which builds between a female fan and her favored idol. And then, of course, there’s the fact that the target audiences for these sorts of shows are themselves largely male and uninterested in following the exploits of male fans when they could be focusing on cute and appealing young women instead. Yet, even so, it still seems strange to me that while idol shows have proliferated and while otaku-centric shows have proliferated, idol otaku tales have remained largely an uncharted zone.

So, OshiBudo delivers us into a realm that is both familiar for many of us, what with idol fandom being somewhat adjacent to anime fandom, and also very much not. And, personally, its a fandom I’m inclined to find off-putting on the best of days, what with the sheer levels of possessiveness by fans. Yet in watching the first two episodes of OshiBudo, I found myself recognizing what a person could get out of idol fandom, as there’s a strong sense of community evinced in the depiction here. Even as some of the behavior by Eripiyo and her friends Kumasa and Motoi remains creepy, watching the three of them interact, whether as they bicker over their favorites or as they encourage each other despite setbacks in their quest to support their favorites, is enjoyable. Even as I question their obsession with idols and how that manifests, I find their relationships with one another wholly convincing. These three have genuine concern about each other (although I think they could stand to be a little more willingness to be critical of one another).

But, then there’s the other thing that really stuck out to me in watching OshiBudo, and it’s one that I don’t think was intentional – because while the show presents an idealized relationship developing between a fan and an idol, wow does it also make explicit how utterly exploitative the idol industry is of the fans. The first episode depicts Eripiyo and her fellow super-fans waiting in the blazing heat for hours on end to ensure they can get a photo taken with the idols in what is meant as both a humorous sequence but also as a demonstration of the genuine nature of their relationships with the idols, as underscored by a shot at the end of the episode of Maina looking at a photo of herself and Eripiyo fondly. And in the second episode we learn that Eripiyo’s only set of clothing is her track suit from high school; as previously hay has been made of the fact that she spends all of her money on her hobby, it seems clear that she simply has no money for other clothing. This, too, is meant to be a bit funny. Speaking of money, it is mentioned a fair bit throughout in relation to how much of a fan someone is, and the oft-present consideration of it contributes to the failure of the humor in the two situations I’ve mentioned to hit the target. Haha, Eripiyo works an unrewarding and mind-numbing job and spends her off-days exposing herself to heat exhaustion in the only outfit she can afford to own! Ha… ha?

After ages of being aware of the how much exploitation of performers is involved in the industry (the Minami Minegishi situation, anime like Perfect Blue), so much so that even a lot of bog-standard idol anime have come to feel obligated to make some vague gestures in the direction of “gee, the idol industry sure can be slimy, huh!”, it feels a bit shocking to be reminded bluntly that there’s a two-way street of exploitation at work. We notice it less regarding fans since they’re less visible to begin with (and they’re not, really, supposed to be visible beyond as signifiers/props) and because when they do become visible it’s often as they’re acting in a particularly reprehensible fashion (for example, the machete attack on Mayu Tomita in 2016 by a disgruntled fan), something which does not lend itself to sympathy. That they must collude in their own exploitation also encourages one to not give it much thought (although it is worth pointing out that the apparent collusion in their own exploitation by idols themselves is a reason the industry continues to be so rife with abuse, as many dismiss it as a concern because “they knew what they were getting into”). But OshiBudo in bringing us up close to the fans inadvertently gives the game away, as it wants us to recognize the fans as human and to cheer on a romance between Eripiyo and Maina, which in turn makes it difficult if not impossible to ignore the distorting effects of the idol industry’s monetary and emotional exploitation of its fans.

This entry was posted in Uncategorized and tagged fandom, idol industry, idols, if my favorite pop idol made it to budokan i would die, mayu tomita, minami minegishi, oshi ga budoukan ittekuretara shinu, oshibudo. Bookmark the permalink.

1 Response to Exploitation, a Two-Way Street, or, Mulling ‘If My Favorite Pop Idol Made it to Budoukan, I Would Die’