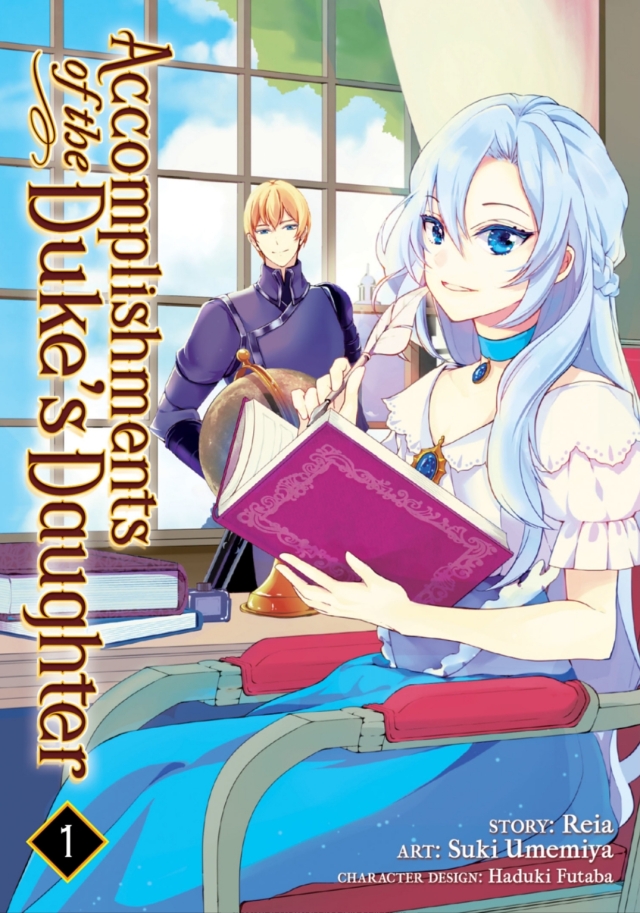 First thing’s first – this is actually a re-read of these volumes for me, as I had wanted to re-read ahead of the release of the sixth volume in August, and also as I wanted to review the series since I quite like it but it seems like it hasn’t gotten much traction overseas. So, here I am… and I have to admit that the first volume is a bit on the weak side, even as much as I like the series as a whole.

Accomplishments of the Duke’s Daughter starts us out in a setting which is, by now, fairly familiar – our lead has been reborn into an otome game she’s been playing! But she’s the villainess! But whereas tales like My Next Life as a Villainness or Deathbound Duke’s Daughter drop our heroine into the game world early enough that there’s time to avoid a bitter fate, the woman at the heart of this story gets no such luck. She awakens as Iris Lana Armelia at the very moment where she’s being publicly condemned by her erstwhile fiancee for harassing Yuri Neuer, the heroine of the game. But while there’s no avoiding that experience, quick-thinking is in order if she wants to prevent herself from being consigned to a convent for shaming her family. Thus begins Iris’s journey from being tossed from polite society to becoming an enviably competent acting lord of her family’s fiefdom; for Iris, being spurned romantically absolutely will not be the end. In these two volumes, the focus remains on Iris working hard to improve the fiefdom and to create a space within her society for herself that isn’t normally available to women.

As I’ve noted it already, the first volume is a bit on the weak side – the early scenes involving Iris refusing to give up on her own dignity and arguing with her father in favor of her own preservation are very strong, but what follows is, at points, just a little too simple and easy. However, Iris presents a compelling enough character herself to prevent things from descending into dullness; its a little less fresh on re-read to have such a smart female lead in an isekai (albeit it isn’t the text’s fault that the amount of female-led isekai available in English has exploded since Seven Seas started publishing this two years ago), but Iris’s confidence in her ideas delights me.

Something I noticed re-reading this is the degree to which this is a power fantasy in ways that I think are less common for female-led isekai, as opposed to male-led ones. Iris worked in a tax office in her previous life, and worked herself weary doing so; she dies after working overtime, hit by a car because she was wearing headphones and failed to hear it’s approach. But it is her dedication to that job in her prior life that allows Iris to succeed in her new one, as she’s able to apply the skills from her job experience to a world wholly unfamiliar with concepts like banking and modern accountancy practices. While Iris doesn’t seem to have much regret regarding her original life, there nevertheless is a sense of – what if you DIED and you were reborn in another world and your not particularly thrilling skillset meant you were badass and everyone acknowledged it?

The rest of the cast doesn’t get as much love and some are absolutely archetypes, although they make for a likeable bunch for the most part. Tanya, personal maid to Iris and would-be murder machine, is a predictable sort of character, but I like her regardless; ditto for bookish Rehme, whose encyclopedic knowledge is very handy for our heroine’s schemes. Meanwhile, Iris’s bratty brother, Berne, is unpleasant but its fun to see him burst onto the scene only to be taken aback by his sister’s hardworking ways.

Far less fun is the weird occasional fatphobic stuff that seeps in. There isn’t much of it, but its jarring when it does appear, as its centered around something we know isn’t true because of the visual nature of the story. Early on, Iris insists that her body is flabby somehow, and much later Berne fails to recognize his own sister because she’s so slender… but Iris looks exactly the same as she did in the first chapter. So, its irritating because fretting about the heroine being fat is irritating, but also as its a blatant insult to the reader’s intelligence. It only comes up these two times, but that doesn’t lessen how unwanted it is.

Another point of weakness is that, even as someone with no familiarity with the light novels from which this was adapted, one can sense that there’s some compression going on. I found it easy enough to look past, but a couple of the timeskips are a bit jarring.

Regarding the English release… there’s one spot where a line is printed twice, but that was the only issue I noticed with these volumes overall. As with every other Seven Seas release I’ve read via Global Bookwalker, there’s a weird absence of a navigable digital table of contents, weird in part as this isn’t something which crops up in the releases of theirs I’ve read via Kobo. Nor is it something that other publishers feature in their releases on Global Bookwalker – the Yen Press and KUMA books I’ve read on the platform have navigable tables of contents.

While later volumes are stronger, these opening ones are hardly without their merits – otherwise, surely I wouldn’t have continued past them. Iris is a great lead, and should be especially appealing to folks who like the conceit of reborn as the villainness isekai but are sometimes frustrated with the lack of smarts on the part of the leads. Since this has been getting an English language release for a couple years already, I’m doubtful that the light novels will get a release themselves, but I’d be thrilled if they were. My re-read will continue apace.