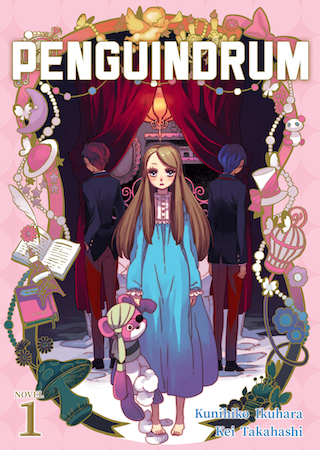 Himari, Shouma, and Kanba are three impoverished siblings eking out a living in Tokyo in the absence of their parents, something made somewhat more difficult as Himari is suffering from some vague disease which kills her during an outing to an aquarium… before a penguin hat revives her in a hospital morgue. Her brothers are a bit perturbed by this, and bewildered when shortly thereafter she starts donning said hat at unexpected moments and displaying an entirely different personality. Himari’s alter ego is also fond of dropping the two boys into some otherworldly space and demanding that they track down a mysterious object called “Penguindrum”. Himari for her part seems to be wholly unaware that any of this is going on. As the boys begin to try to figure their new circumstances out, the siblings’ paths cross with Ringo, a girl whose obsession with a teacher seems to be pretty firmly into delusional territory… and who may be the person with the Penguindrum.

Kunihiko Ikuhara’s first anime in fifteen years, Penguindrum made a pretty decent splash when it aired in 2011. In addition to the anime series, a manga adaptation and a novelization were both penned, but neither was picked up for a Western release at the time. The LN market in particular was a lot less vibrant than its become in more recent years, and while this is a novel rather than a LN, from a marketing perspective, the difference still doesn’t matter a whole lot – cover style and relationship to an anime mean it gets rolled in with LNs when it comes to fan appetite. That it did end up getting licensed for a release so many years after the fact was a bit of a surprise, even given that Penguindrum was a cult hit overseas – fans last longer on average than they used to in anglophone anime fandom but 2011 is still probably two lifecycles back for the fandom writ large.

Unlike is the case sometimes with novelizations of existing anime, this first volume easily stands on its own; unlike is the case with the novelization of Ikuhara’s later series Saranzami, which I reviewed here in July, prior knowledge of the anime isn’t at all necessary. Some of the scenes did work better in the anime due to the anime’s visual flair, but nothing here is rendered confusing by the lack of visuals.

As someone who has seen the TV series, what was of most interest to me were the differences between that and this, especially as in terms of plot and events this very closely follows the anime’s story. Instead, the differences are more in terms of presentation. This volume is largely pitched from Shouma’s point of view, albeit generally in a third-person fashion, i.e. we are privy to his thoughts but not bound solely within his head. We also get more insight into how Himari feels about things, which is a marked changed from the anime – and a welcome one considering how frustratingly little time she got as a character rather than as a cherished object (and, sure, there’s narrative reasons for positioning her as such since its underscoring her brothers’ failure to truly take into account that she’s a person with her own wants and desires, but I don’t think it worked well).

So, as a book, this is… well… The fact is, I think this is a good book without myself actually enjoying it much. Penguindrum is my least favorite of Ikuhara’s works by a fair distance, and is something which I think I would describe as having been more interesting than having been good. I was intrigued by the wrestling with the legacy of the 1995 sarin gas attacks on the Tokyo subway, but it’s his messiest work and the messages are ultimately a bit garbled. I strongly dislike the ending of the show, as it deprives two characters of their own agency, one of whom had already been pretty lacking in that department over the course of the show. So, yes, I would say this is a good book, but it is a good book that I nevertheless didn’t really like and which also took me a long time to finish because of that.

This is a well-handled release. I’ve reviewed a lot of Seven Seas’ titles here, so this may not seem a surprise, but I’ll note that a company handling manga well does not necessarily mean it’ll handle a novel well. This is, too, a more complex work than are the LNs I’ve picked up from Seven Seas, so that same sentiment applies there. Translator Diana Taylor has handled this ably, and my own lack of enthusiasm over this as a story shouldn’t be taken as at all indicative of the quality of the translation.

Totally worth reading for Penguindrum fans, and also probably worth a try from folks who find the description interesting or who have meant to try the anime but never quite gotten around to it. I’m really glad these novels have been licensed, but its surely clear that I will not be picking up volume two… although I do really like the cover that’s been released for it, and, you know what? I like this cover a good bit, too, a little surprising since I’m not a fan of Lily Hoshino’s art style.