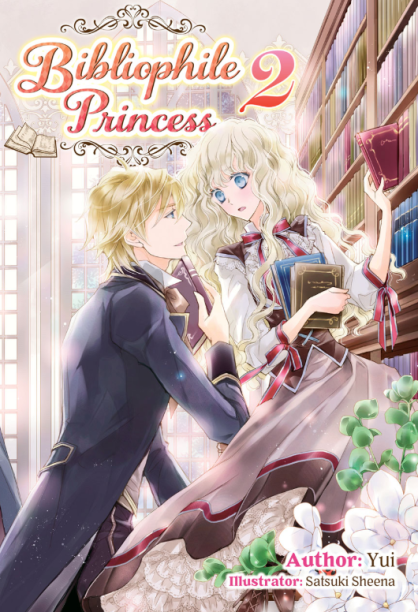 Our other favorite bookworm is back.

This review has been a while in coming; I read this when it came out back in May and started my review, but then… well, everything that’s been going on intervened. But having hit a slight ebb this weekend, I am more than overdue to get back to reviewing a LN I sincerely enjoyed.

The second volume of Bibliophile Princess is similar to the first in that the first (and largest) portion is largely made up of politicking and scheming, with a few dashes of Elianna trying to express her affection for her betrothed, Prince Christopher, while being plagued with doubt over how to do so. In fact, she is so plagued by doubt that she nearly misses seeing him off as he is on the cusp of departing without her to attend to some of his royal duties. Elianna can’t join him as she’s been delegated to fulfil royal duties at a shooting party being held by a noble family. Intrigue awaits her! Which she handles fairly well, even if she is entirely too credulous when it comes to younger noblewomen gunning for her position as the crown prince’s fiancee.

All of this takes up about three-quarters of the book, with the final quarter given over to short stories which are a decided step down from the main story! The one focused on Prince Christopher’s knights paints the man in a less rosy light than one would like in a romantic lead (driving your men through the night because you have some jealousy issues is, uh, not very mature). But the one involving associates of the prince mistakenly thinking Elianna is pregnant is the one which is deeply, deeply tiresome, so if you’re going to give this a read, you can just skip that entirely.

I’d noted in my review of volume one that Elianna read to me, at least, as being on the autism spectrum, and this is an impression which endures in this volume. As I said there, I do not mean this negatively at all (isn’t it frustrating that the rendering of “autistic” as an epithet makes it necessary for me to even have to specify this?). Even though I don’t think the effect is intentional, autistic girls and women are a rarity in fiction, so its cool to come across a character who reads as autistic and who isn’t pathologized within the text for it. I REALLY like Elianna. (By the way, translator Alyssa Niioka told me they themself had wondered if Elianna was autistm spectrum.)

Speaking of Niioka, they return for the translation effort here along with editor Suzanne Seals. From the best I can tell, J-Novel Club doesn’t generally switch their book teams midstream, but when I read a well-handled LN, I’m always glad to see the same folks return for subsequent volumes! And its a repeat performance of their previous work, leaving me eminently pleased with the reading experience.

As is surely obvious, I really enjoyed this installment of Bibliophile Princess. Author Yui seems to do best with political intrigue, so it was good to have a return to that here. I also really appreciated the introduction of a female charcter who is wholly uninterested in romance and who wants a career – its been alluded to before that its a bad thing that their world is sexist, so its nice to have a new character who can push up against that in ways Elianna won’t be. Volume three is out on the 28th!