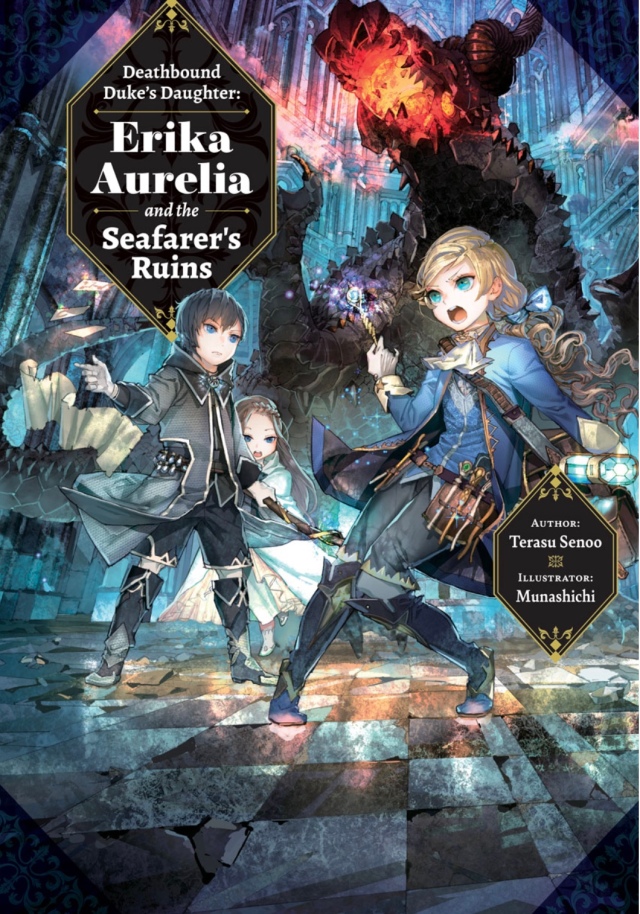 Another day, another reincarnated Japanese woman trying to not get killed in an otome game.

Erika Aurelia is a duke’s daughter with a reputation for brattiness when she realizes, with a shock, that she is actually a Japanese woman who has reincarnated into the otome game she was playing when she was murdered by a co-worker. And its not a moment too soon for her to have remembered her past life, as the girl she is now is the minor villainess whose death kicks off each of the various routes of said game – and she’s only made it by a day to avoid the precipitating event for one of those deaths. All she has to do is keep siblings Anne and Claus, noble children themselves, away from the Seafarer’s Ruins, a labyrinth built by her ancestors hundreds of years before. Unfortunately, Claus proves harder to put off the scent than hoped, leaving Erika bound the venture into the Ruins herself, lest the doom flag prove impossible to fell.

I think this is the fourth LN series we’ve gotten in English that’s “what if reborn in an otome game… but as the villainess?!”, which I think means I can refer to the release of such stories as a trend. One imagines that the recent success of the My Next as a Villainess: All Routes Lead to Doom anime overseas means we should expect to get even more – although it’s hardly as if the LN or manga for that franchise hadn’t done very well on their own as it was. While Deathbound Duke’s Daughter opts to start off in roughly the same spot as does My Next Life…, it’s immediately obvious that it wants to take a more serious spin on the genre. Claus may wrap around to being a suitor by the end of this first volume, but Erika’s both much sharper and a lot more cynical than lovable goof Katarina. And her backstory certainly is much more tortured – sure, she’s a would-be murder victim in the game world, but at least on her second try at life she’s got the foreknowledge that should help her avoid meeting the same fate twice.

Speaking of which… Erika’s backstory is the part of this volume which gave me some pause, as it treads some fairly well-worn and frankly pretty tiresome ground. Erika was part of a science club in high school, and she was GASP the only girl in it. This of course meant all the boys were hot for her! Which also meant all the girls in the school hated her!! Then she moved onto college and work, and, oh dear, the same sort of dynamic kept repeating. And then a man she’d rejected kills her. Taken altogether, well, it isn’t as if it would’ve been impossible to have done something deeper with this, to have given some consideration to the ways in which patriarchal societies enable situations in which a woman isn’t “allowed” to turn someone down sans punishment. But it’s fairly clear that this story has no interest in that – Erika’s previous life is just really there as tragic garnish. That there are repeated moments throughout which essentially boil down “I’m not like other girls!” underscores that the author wasn’t seeking to provide any commentary/critique of sexism in society. Erika was just a hot property in her first life; bitches couldn’t deal and her beauty drove men bonkers.

Thankfully, this aspect does lessen a bit as the book goes on, although it never entirely disappears. Anne turns out to be powerful and smart in her own right, which does help, a surprising turn of events given that she is set up during the labyrinth portion of the book as a potential maiden in distress. And, who knows, maybe Erika’s deceased mother, vilified often, will have turned out to have been a canny and ambitious person herself who has simply been demonized for not behaving within the bounds of her society’s conception of “woman”.

J-Novel Club’s release is good – no shock that, but it deserves mention regardless. I haven’t previously read something handled by the combination of translator Roy Nukia and editor Taylor Fonzone, but if the final product is anything to go by, they make a good team.

Since it might be unclear, I’ll note that, despite my critiques, I did enjoy this opening volume of Deathbound Duke’s Daughter. I’d actually originally pre-ordered it to help tide me over until the next volume of Tearmoon Empire comes out (July 19th, so we’re almost there)! So, its nice that it turned out to be decent in its own right. If you, like me, have enjoyed Tearmoon Empire, this will probably be to your tastes as well. Volume two just got it’s streetdate, so my next stop after this review is to pre-order it.